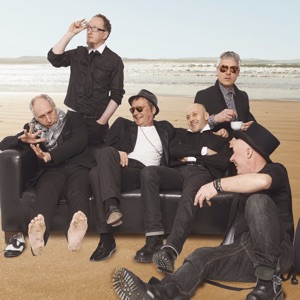 Acerca de Elektryczne Gitary
Something of a cross between a rock band and comedy act, Poland's Elektryczne Gitary (Electric Guitars) are legendary for serving up highly infectious melodies and side-splitting humor. Jakub Sienkiewicz is the driving force behind the outfit, providing dry vocals and witty lyrics; others include Tomasz Grochowalski, Aleksander Korecki, Piotr Lojek, and Leon Paduch. Formed in 1990 amidst massive political and social turmoil in Eastern Europe, it didn't take long for the Guitars to make an impact on the newly liberated Polish music scene. In 1991, local radio stations couldn't get enough of their first two releases: the wacky pop/rock tunes "Wlosy" (Hair) and "Jestem z Miasta" (I'm From the City). And a year later, they had a massive hit on their hands with the album Wielka Radosc (Great Joy). A work full of clever commentary about life in the '90s in Poland, it boasted such catchy numbers as "Wszystko Ch" (Everything's F****d), "Czlowiek z Lisciem" (A Man with a Leaf in His Hair), "Wlosy," and "Jestem z Miasta." Barely a year later they coughed up another widely acclaimed album, A Ty Co (So What's Your Story), including the popular tracks "Dzeci" (Kids) and "Nie Pij Piotrek" (Stop Your Drinking Pete). Though Sienkiewicz then started dabbling in solo projects, the band stayed together and released another album, Hustawki (Swings), in 1995. A year later came the live CD Chaltury (Moonlighting). They were busier than usual in 1997, releasing the very strong album Na Krzywy Ryj (roughly translated as Out on the Street) as well as the soundtrack to the popular Polish film Kiler. They then wrote the soundtrack to the sequel of that film, Kilerow 2-och (Two Killers). In 2000, they served up the album Slodka Maska (Sweet Mask), a double CD set that also included a live recording of the tracks on this album as well as some of their greatest hits. ~ David Peter Wesolowski