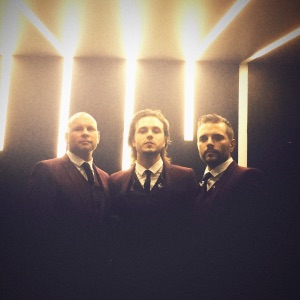 Acerca de Enation
ENATION were formed in Battle Ground, Washington in 2002 by brothers Jonathan Jackson (vocals, guitar) and Richard Lee Jackson (drums), along with friends Daniel Sweatt (bass), Luke Galeotti (guitar), and Michael Galeotti (keyboards). Both Jackson brothers had flourishing acting careers in film and television going when the band officially formed, and while it is tempting to view their musical aspirations as an adjunct, both view acting and playing music under the same creative umbrella -- as a way to tell a story. ENATION released an independent debut album, Identity Theft, in 2004, basing their sound on the anthemic pop template of bands like U2 and Radiohead, with Jonathan writing most of the material and serving as the frontman. Two more independent albums followed in 2007, Soul u0026 Story, Vol. 1 and Where the Fire Starts, with a third, World in Flight, arriving a year later in 2008. That same year the albums Identity Theft and Where the Fire Starts were combined in a single package and re-released as Falling Into Sounds: The Early Sessions 2004-2007. In 2010, they put out the live album The Future Is a Memory: Live from the Northwest, and the studio LP My Ancient Rebellion followed in 2011. With their singer landing a recurring role on the ABC musical drama Nashville in 2012, ENATION released 2014's Radio Cinematic on Loud-N-Proud Records as Jonathan Jackson + Enation. By then the band was down to the trio of the Jackson brothers and bassist Sweatt. Blame-Shifter followed in 2016 on the MRI label, and in early 2017 Sweatt left the group to spend more time in his base of Portland. The stormier, Greg Archilla co-produced Anthems for the Apocalypse arrived that summer on Hilasterion Records. ~ Steve Leggett