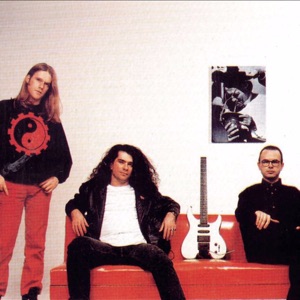 FORMACIÓN
1984
Acerca de Engenheiros Do Hawaii
The Engenheiros do Hawaii were formed in 1984 in Porto Alegre, RS, by guitarist/vocalist Humberto Gessinger (born in 1962, Porto Alegre), drummer Carlos Maltz (born in 1963, Porto Alegre), and bassist Marcelo Fagundes Pitz (born in 1963, Porto Alegre). Guitarist Carlos Stein (from Nenhum de Nós) joined the band in their early performances but left soon afterwards. The band made their first performance on January 11, 1985. With a good response, they departed for precarious shows in upstate Rio Grande do Sul.nn The BMG label, interested in releasing a compilation of the new bands of the South, heard of a festival at the Gigantinho stadium in which the Engenheiros do Hawaii were selected to perform. Of the two songs included in the LP, "Sopa de Letrinhas" scored a hit in their region, and BMG decided to dedicate a solo album to them. Longe Demais das Capitais had the hit "Toda Forma de Poder," which was included in a TV Globo soap opera. But at that point, the newly married Pitz left the group. Gessinger took over on bass and invited guitarist Augusto Licks to the band. Their second album, A Revolta dos Dândis, came in 1987, bringing more hits: "Infinita Highway," "Terra de Gigantes," and "A Revolta dos Dândis." On July 16, 1988, the Engenheiros played in the III Festival Alternativa Nativa at the Maracanãzinho (Rio) for 20,000 people, and from then on, concerts for packed stadiums would be a common practice for them.nn In 1988, the Engenheiros recorded Ouça o Que eu Digo, Não Ouça Ninguém. The album introduced keyboards in the band's sonority, and had the successes "Ouça o Que eu Digo, Não Ouça Ninguém," "Somos Quem Podemos Ser," "Tribos e Tribunais," and "A Verdade a Ver Navios." At that point, the Engenheiros came to Rio de Janeiro, and in the next year performed in Moscow, the same year in which they recorded their fourth album, Alívio Imediato, live at Canecão (RJ), with hits like "Terra de Gigantes" and "'Toda Forma de Poder" together with a couple of new songs.nn Their fifth LP, O Papa é Pop (1990), sold 350,000 copies and had several hits: "Homem só," "Era um Garoto..." (the first non-original), "Pra Ser Sincero," and "Perfeita Simetria." The album included the drum machine and was the first to be produced by the bandmembers. The band also was a success at the controversial Rock in Rio II, being the only Brazilian band positively mentioned by The New York Times.nn In 1991, the Engenheiros recorded Várias Variáveis, which, with its green cover, completed the trilogy of the basic colors of the Rio Grande do Sul flag. The album was also self-produced and had success with "Piano Bar," "Ando Só," "Muros e Grades," and "Herdeiro da Pampa Pobre." In 1992 came the seventh album, GLM. With an English progressive rock bend to their sound, the band produced two hits with that album, "Ninguém = Ninguém" and "Parabólica" (written for Gessinger's daughter, Clara).nn At the Hollywood Rock festival in early 1993, the Engenheiros opened for Nirvana and were booed by Nirvana's fans, who obviously didn't want to listen to the Brazilian band.nn Their eighth album, Filmes de Guerra, Canções de Amor, was recorded live at the sophisticated Cecília Meireles (Rio). The album had arrangements by Wagner Tiso and the participation of the Orquestra Sinfônica Brasileira. The album was divulged in tours through Japan and the U.S.A., during which a home video was made that was also released. In late 1993, Lick left the band and was replaced by Ricardo Horn, with the band continuing to tour in support of the new album. Guitarist Fernando Deluqui (former RPM) and accordionist/keyboard player Paolo Casarim also joined the group.nn In late 1995, a new album, Simples de Coração, was released, produced in Los Angeles by Greg Ladany. They also recorded an English version of the album. The album had the hits "A Promessa," "A Perigo," and "Simples de Coração."nn In 1997, Carlos left the band. With guitarist Luciano Granja, drummer Adal Fonseca, keyboard player Lúcio Dorfman, and Gessinger as the new formation of the Engenheiros, the band recorded Minuano, which had the hits "A Montanha" and "Nuvem." ~ Alvaro Neder