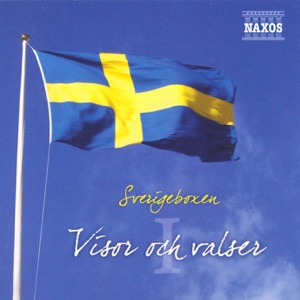 NACIMIENTO
1890
Acerca de Evert Taube
Not counting 18th century poet Carl Michael Bellman, Evert Taube is without any doubt the number one Swedish troubadour, inspiring a great number of followers, leaving behind more classics than anyone else, and being translated to many foreign languages. Born in 1890, he grew up on the small island of Vinga, where his father kept a lighthouse. Taube studied art in school, but at the age of 17, he ran away to Stockholm, where he, according to the tradition, spent his first night by the grave of Bellman. Unsuccessfully he tried to make a living as a painter, and when his father heard about his whereabouts, Taube faced the ultimatum of going back to school or becoming a sailor. He chose the latter and was to spend the coming years onboard a number of freighters. Arriving in Argentina in 1910, he decided to settle down and made a living as a railroad worker, journalist, and tram conductor. The time spent there and at sea was later to prove an important inspirational source for Taube, both in teaching him how to play tango and in giving him motifs for his production.nn When World War I broke out, he travelled home to do his military service, ending up as a marine after being refused a place in the cavalry. In 1917, he published his first song, "Resan till Spanien," which was printed in a weekly magazine, and soon after, he made his first public performance. Still not having recorded anything, he spent the following years working as a journalist, publishing his second novel, and trying to be a painter. Nothing of this was very successful, but with the songbook Sju Sjömansvisor och Byssan Lull, Taube finally got recognition as a songwriter. This was a dilemma that would follow him through his entire life. Wanting to be a part of the cultural elite, writing high poetry and prose or maybe painting, it was his ballads that won him fame. And, needless to say, sea shanties were not as highly regarded as traditional poetry at the time.nn In 1921, he made his first recording using acoustic techniques, since the electric microphone was not yet in use. On the cover, Taube was branded as a cabaret singer, and the two songs included are "Frithiof Andersson" and "Karl-Alfred." In 1925, he married the artist Astri Bergman, and during the following years, his reputation was built up until he broke through into national fame with the song "Calle Schewens Vals," a waltz with a nature-based lyrical motif, in 1931. From then on he was able to earn his living on music, and soon even able to live quite a comfortable life with trips to South America and long periods spent in Italy and France. In 1937, Evert Taube recorded a number of songs in Milano with an Italian symphony orchestra, among them the burlesque "Frithiof i Arkadien." But soon the war broke out, and for another six years, Taube was confined to his home country. And when the war was over, he was already getting old. Not that that stopped him from touring, he kept on doing that until a few years before his death. And that his voice was getting grittier every year, until it became hard to hear the tones, only adds an air of wisdom and melancholy to the lyrics. But he has still not received the recognition from the cultural elite he had so sought for. And though his books and poetry will never earn him that, in 1950, an article by Lars Forsell in a poetry magazine points out the excellence of Taube's lyrics. And this seems to mark a turning point. From now on, Taube started to receive awards and scholarships and was also assigned an honorary doctorate at the University of Göteborg.nnEvert Taube kept on writing songs, recording records, and engaging in environmental issues until a few years before his death in 1976. He made his last big tour in 1969 and played in public for the last time ever in 1973. When he died three years later, he left behind a number of Swedish classics probably only equaled by that of Carl Michael Bellman. ~ Lars Lovén 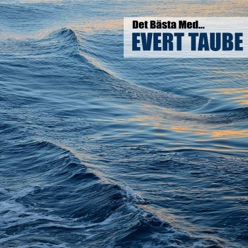 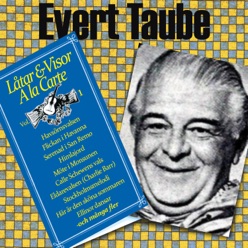 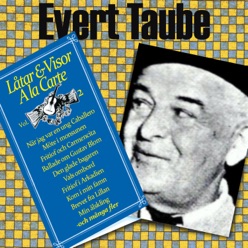