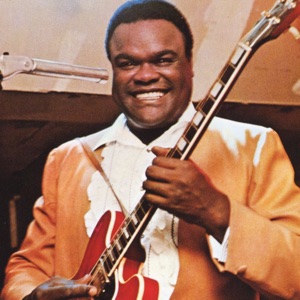 CIUDAD NATAL
Gilmer, TX
NACIMIENTO
3 de septiembre de 1934
Acerca de Freddie King
Guitarist Freddie King rode to fame in the early '60s with a spate of catchy instrumentals which became instant bandstand fodder for fellow bluesmen and white rock bands alike. Employing a more down-home (thumb and finger picks) approach to the B.B. King single-string style of playing, King enjoyed success on a variety of different record labels. Furthermore, he was one of the first bluesmen to employ a racially integrated group on-stage behind him. Influenced by Eddie Taylor, Jimmy Rogers, and Robert Jr. Lockwood, King went on to influence the likes of Eric Clapton, Mick Taylor, Stevie Ray Vaughan, and Lonnie Mack, among many others.nnFreddie King (who was originally billed as "Freddy" early in his career) was born and raised in Gilmer, TX, where he learned how to play guitar as a child; his mother and uncle taught him the instrument. Initially, King played rural acoustic blues, in the vein of Lightin' Hopkins. By the time he was a teenager, he had grown to love the rough, electrified sounds of Chicago blues. In 1950, when he was 16 years old, his family moved to Chicago, where he began frequenting local blues clubs, listening to musicians like Muddy Waters, Jimmy Rogers, Robert Jr. Lockwood, Little Walter, and Eddie Taylor. Soon, the young guitarist formed his own band, the Every Hour Blues Boys, and was performing himself.nnIn the mid-'50s, King began playing on sessions for Parrott and Chess Records, as well as playing with Earlee Payton's Blues Cats and the Little Sonny Cooper Band. Freddie King didn't cut his own record until 1957, when he recorded "Country Boy" for the small independent label El-Bee. The single failed to gain much attention.nnThree years later, King signed with Federal Records, a subsidiary of King Records, and recorded his first single for the label, "You've Got to Love Her With a Feeling," in August of 1960. The single appeared the following month and became a minor hit, scraping the bottom of the pop charts in early 1961. "You've Got to Love Her With Feeling" was followed by "Hide Away," the song that would become Freddie King's signature tune and most influential recording. "Hide Away" was adapted by King and Magic Sam from a Hound Dog Taylor instrumental and named after one of the most popular bars in Chicago. The single was released as the B-side of "I Love the Woman" (his singles featured a vocal A-side and an instrumental B-side) in the fall of 1961 and it became a major hit, reaching number five on the Ru0026B charts and number 29 on the pop charts. Throughout the '60s, "Hide Away" was one of the necessary songs blues and rock u0026 roll bar bands across America and England had to play during their gigs.nnKing's first album, Freddy King Sings, appeared in 1961, and it was followed later that year by Let's Hide Away and Dance Away With Freddy King: Strictly Instrumental. Throughout 1961, he turned out a series of instrumentals -- including "San-Ho-Zay," "The Stumble," and "I'm Tore Down" -- which became blues classics; everyone from Magic Sam and Stevie Ray Vaughan to Dave Edmunds and Peter Green covered King's material. "Lonesome Whistle Blues," "San-Ho-Zay," and "I'm Tore Down" all became Top Ten Ru0026B hits that year.nnFreddie King continued to record for King Records until 1968, with a second instrumental album (Freddy King Gives You a Bonanza of Instrumentals) appearing in 1965, although none of his singles became hits. Nevertheless, his influence was heard throughout blues and rock guitarists throughout the '60s -- Eric Clapton made "Hide Away" his showcase number in 1965. King signed with Atlantic/Cotillion in late 1968, releasing Freddie King Is a Blues Masters the following year and My Feeling for the Blues in 1970; both collections were produced by King Curtis. After their release, Freddie King and Atlantic/Cotillion parted ways.nnKing landed a new record contract with Leon Russell's Shelter Records early in 1970. King recorded three albums for Shelter in the early '70s, all of which sold well. In addition to respectable sales, his concerts were also quite popular with both blues and rock audiences. In 1974, he signed a contract with RSO Records -- which was also Eric Clapton's record label -- and he released Burglar, which was produced and recorded with Clapton. Following the release of Burglar, King toured America, Europe, and Australia. In 1975, he released his second RSO album, Larger Than Life.nnThroughout 1976, Freddie King toured America, even though his health was beginning to decline. On December 29, 1976, King died of heart failure. Although his passing was premature -- he was only 42 years old -- Freddie King's influence could still be heard in blues and rock guitarists decades after his death. ~ Stephen Thomas Erlewine u0026 Cub Koda 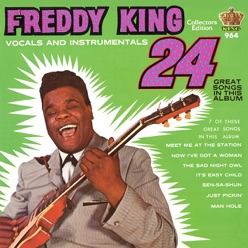 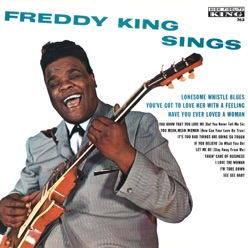 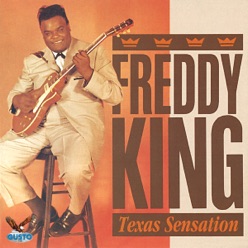