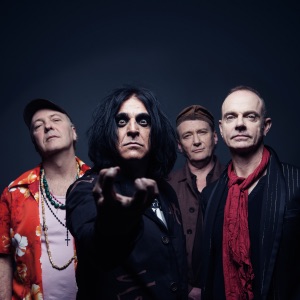 FORMACIÓN
1978
Acerca de Killing Joke
Heavy and slow, Killing Joke (at least early in their career) were a quasi-metal band dancing to a tune of doom and gloom. They eventually became less heavy and more arty (the latter seems almost impossible) -- more danceable, even -- but early on they made some urgent slabs of molten dynamite that oozed with the power of thick guitars, thudding drums, and over the top singing. The origins of Killing Joke lie in the Matt Stagger Band. Paul Ferguson was drumming for the group when he met Jaz Coleman (vocals, keyboards) in the late '70s. Coleman joined the Matt Stagger Band briefly, but soon he and Ferguson split to form Killing Joke in late 1978. The duo recruited bassist Youth (born Martin Glover Youth), who had previously played with the punk group the Rage, and guitarist Geordie (born Kevin Walker) to complete the band's lineup. Killing Joke moved to Notting Hill Gate and recorded their debut EP, Almost Red, with money borrowed from Coleman's girlfriend at the time. BBC disc jockey John Peel was impressed by the EP and offered the group a session on his show, which became one of the most popular shows he broadcast in the late '70s. By the end of 1979, the group had signed with Island Records, who allowed them to set up their own label, Malicious Damage.nnKilling Joke released "Wardance," their debut single on Malicious Damage, in February of 1980. Following its release, Killing Joke and Malicious Damage switched from Island Records to EG and the band released their eponymous debut album. The group began playing shows regularly throughout England and gained a reputation for being controversial. Their artwork often featured repulsive or inflammatory images, and after one of their concert posters pictured the Pope blessing legions of Nazis, the group was banned from performing a concert in Glasgow. Despite the controversy, the group began amassing a following of both punk and disco fans with hard-edged but danceable singles like "Psyche" and "Follow the Leader." The band released its second album, What's THIS For...!, in 1981.nnAfter recording and releasing the group's third album, 1982's Revelations, Jaz Coleman -- who had developed an obsession with the occult -- decided that the Apocalypse was near, so he left the group and ran away to Iceland with Geordie. While in Iceland, Coleman and Geordie worked with a number of Icelandic bands, most notably Theyr, which would later evolve into the Sugarcubes. Youth followed Coleman to Iceland shortly after his departure. After a few months with no sign of the end of the world, Youth returned to England and formed Brilliant with Ferguson. However, Ferguson left shortly after the group's formation and moved to Iceland with Killing Joke's new bassist, Paul Raven. Youth continued playing with Brilliant, while Killing Joke's new lineup -- featuring Coleman, Geordie, Ferguson, and Raven -- worked in Iceland for a brief period. Soon, the group returned to England and recorded Fire Dances, which was released in 1983. Fire Dances demonstrated a calmer, more straightforward band than the one showcased on the group's earlier records.nn For the rest of the '80s, Killing Joke continued to release albums, all of which failed to regain the audience they had in the early '80s. After 1988's Outside the Gate, the group broke up, only to reunite two years later for Extremities, Dirt u0026 Various Repressed Emotions. Extremities featured a new drummer, Martin Atkins, and returned the band to the noisy dance experiments of their earlier records. Following its release, the group took a four-year break. In 1994, Killing Joke re-formed as a trio with Coleman, Geordie, and Youth and the group released Pandemonium, a harder-edged, heavier album than its previous records. Democracy (1996), a second self-titled album (2003), and the live celebration XXV Gathering! followed. After opening for the reunited Mötley Crüe on a 2004 tour of the U.K., the band settled in Prague to record its next album, Hosannas from the Basement of Hell, which appeared in 2006. In October of 2007, Paul Raven died of heart failure in Geneva, Switzerland. The original lineup of Coleman, Geordie, Youth, and Paul Ferguson all attended the funeral and decided to reunite in honor of both Raven and Killing Joke. After a worldwide tour, this lineup entered the studio and recorded the 2010 release Absolute Dissent. Touring and archival releases kept the band busy for the next few years with The Singles Collection: 1979-2012 arriving in 2013, while 2014 saw the release of both the remix set In Dub and the live album Down by the River. The reunited Killing Joke remained prolific, issuing a powerful new studio album, Pylon, in October 2015. ~ Stephen Thomas Erlewine u0026 John Dougan