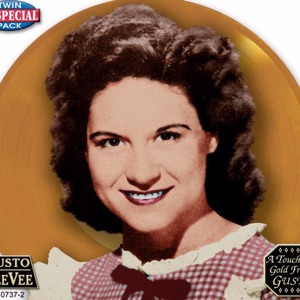 CIUDAD NATAL
Nashville, TN
NACIMIENTO
30 de agosto de 1918
Acerca de Kitty Wells
One of the few country stars born in Nashville, Kitty Wells (born Muriel Deason) had a string of hits from the '50s to the early '70s that earned her the title Queen of Country Music. She made her radio debut on Nashville's WSIX, where she met her future husband, Johnnie Wright of Johnnie u0026 Jack. She began touring as part of Johnnie u0026 Jack's show; Wright gave her the stage name, taken from an old folk ballad called "I'm A-Goin' to Marry Kitty Wells." Wells recorded unsuccessfully for RCA before switching to Decca, where she hit with 1952's "It Wasn't God Who Made Honky Tonk Angels," a response to Hank Thompson's "The Wild Side of Life." Its controversial pre-feminist lyrics, which blamed unfaithful men for creating unfaithful women, paved the way for Loretta Lynn and Tammy Wynette and established Wells as the first major female country star. Wells recorded a number of answer songs and remakes, but she has top-notch original material as well, including some of Harlan Howard's earliest hits.nn Wells began singing as a child, learning guitar from her father. As a teenager, she sang with her sisters, who performed under the name the Deason Sisters, on a local radio station. The group began singing on the station in 1936. The following year, she married Johnnie Wright. Shortly after their marriage, Wells and Wright began performing together along with his sister, Louise Wright; they called themselves Johnnie Wright u0026 the Harmony Girls. Jack Anglin, Louise's husband, joined the group in 1939, and they renamed the band the Tennessee Hillbillies, which would eventually evolve into the Tennessee Mountain Boys.nnAnglin was drafted into the Army in 1942. Following his departure, Wright and Wells performed as a duo; it was at this time that she adopted the Kitty Wells stage name. When Anglin returned from the Army, he and Wright formed the Johnnie u0026 Jack duo. Wells would tour with the duo, occasionally performing backup vocals. In 1946 and 1947, the duo had a regular spot at the Grand Ole Opry, and Wells rarely performed with them. However, she did sing with the pair when they joined the Louisiana Hayride in 1948.nnThe Louisiana Hayride helped Johnnie u0026 Jack land a record contract with RCA Records in 1949. That same year, Wells recorded some gospel tracks -- featuring Johnnie u0026 Jack as instrumental support -- for RCA, but they were unsuccessful. Following those recordings, Wells was more or less retired for the next few years. In 1952, Paul Cohen, an executive at Decca Records, approached Wells to record "It Wasn't God Who Made Honky Tonk Angels." Wells recorded the song and it became a smash hit, reaching number one in the summer and staying in that position for six weeks. Later in 1952, she joined the Grand Ole Opry.nn"It Wasn't God Who Made Honky Tonk Angels" was followed by "Paying for That Back Street Affair," a response to Webb Pierce's "Back Street Affair." The single reached number six in the spring of 1953, helping to establish a permanent place at the top of the charts for Wells. For the rest of the '50s, she hit the Top Ten with regularity, racking up a total of 23 Top Ten hits. In the early '60s, her career dipped slightly, but she continued to have Top Ten hits frequently. During the late '60s and '70s, Wells' streak of hits evaporated, but she managed to have a string of minor hits and remained a popular concert attraction.nn In 1976, Wells was inducted into the Country Music Hall of Fame, and with good reason. Kitty Wells broke down the doors for female country singers, paving the way for artists like Patsy Cline, Tammy Wynette, and Loretta Lynn. During the '80s, her activity slowed -- in addition to running a museum outside of Nashville, she toured with her husband, Johnnie, and frequently appeared on the Grand Ole Opry. In 1991, she was given a Lifetime Achievement Award from the Grammys. In July 2012 she died at home in Madison, Tennessee, from complications of a stroke; Kitty Wells was 92 years old. ~ Brian Mansfield u0026 Stephen Thomas Erlewine 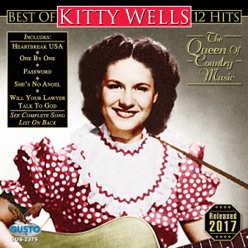 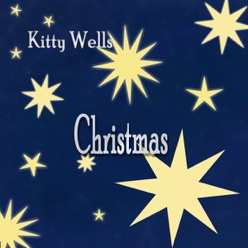 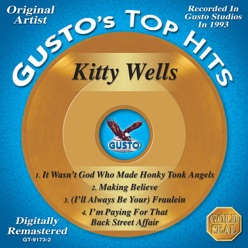