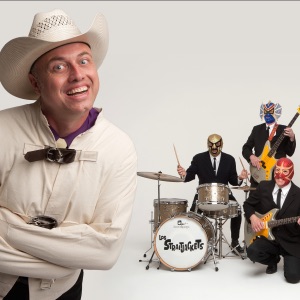 ORIGEN
Nashville, TN
FORMACIÓN
1988
Acerca de Los Straitjackets
Mixing the familiar sounds of Dick Dale, Duane Eddy, and the Ventures, Los Straitjackets create their own version of energetic surf guitar twang, complete with Mexican wrestling masks. Los Straitjackets began in the summer of 1988. Eddie Angel (guitar), L.J. "Jimmy" Lester (drums), and Danny Amis (guitar) formed an instrumental trio called the Straitjackets, which played local Nashville shows throughout the summer. After a six-year hiatus, the Straitjackets reunited, added E. Scott Esbeck on bass, and changed their name to Los Straitjackets. In November 1994, the band signed with Upstart Records. They released their first single, "Gatecrasher" b/w "Lonely Apache," on Sympathy for the Record Industry in February 1995. In March 1995, the band's first album, The Utterly Fantastic and Totally Unbelievable Sound of Los Straitjackets, was released on Upstart. That summer the band went on its first major U.S. tour. In June 1996, the band released its second album, Viva!; it was the last appearance on a Los Straitjackets album for Esbeck, who left the group in 1998, with Pete Curry taking over on bass. The Velvet Touch of Los Straitjackets, their first album for Yep Roc Records, followed in 1999 and Damas y Caballeros! surfaced two years later. The mysterious musos decided to move on to holiday music the next year, and tackled several Christmas favorites on the fun 'Tis the Season for Los Straitjackets! Supersonic Guitars in 3-D arrived in 2003, followed by a collection of outtakes, live tracks, and rarities called Vivos y los Raros in 2004. Twist Party dropped in 2006, which introduced new drummer Jason "Teen Beat" Smay, replacing Jimmy Lester, who had left the group the previous year.nn After releasing the all-star Rock en Español, Vol. 1 in 2007, which teamed the instrumentalists with a handful of vocalists, Los Straitjackets returned in 2009 with The Further Adventures of Los Straitjackets, a back-to-basics album that nixed guest singers and horns in favor of Los Straitjackets' core rocking guitar sound. The quartet expanded to a quintet in 2010 when Los Straitjackets added a third guitarist, Greg Townson. Arriving in 2012, Jet Set marked the return of Amis to the band after recovering from a difficult illness; the album was recorded at the Pow Wow Fun Room Studios in Los Angeles, produced by Janne Haavisto, and featured guest spots from the Basic Cable Horns (best known for their work on the Conan television show) and Finnish actress and musician Irina Björklund. The album also featured a new drummer, Chris Sprague, who took over from Jason Smay. In 2013, Los Straitjackets shared billing with the Fleshtones and Southern Culture on the Skids for an album of horror-themed retro-rock, Mondo Zombie Boogaloo. Los Straitjackets renewed their commitment to "instrumental music with vocals" on the 2014 release Sings the Great Instrumental Hits, with Deke Dickerson (fittingly a man more celebrated as a guitarist than a singer) warbling little-heard lyrics to popular instrumental tunes, including "Pipeline," "Walk Don't Run," and "Honky Tonk." In 2014, Nick Lowe recruited the Masked Marvels to be the backing band on his "Quality Revue" tour in support of his Christmas album Quality Street. By all accounts, both Lowe and his fans were delighted with their performances on the tour, and a live album documenting one of the shows, The Quality Holiday Revue, was released in 2015. Still under the influence of Nick Lowe, Los Straitjackets next recorded a full album of instrumental versions of songs from his catalog. The LP, What's So Funny About Peace, Love and Los Straitjackets, was released by Yep Roc Records in May 2017. ~ Tracy Frey u0026 Steve Leggett 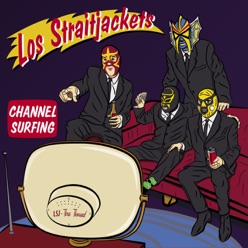 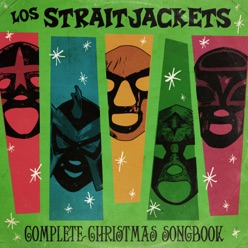 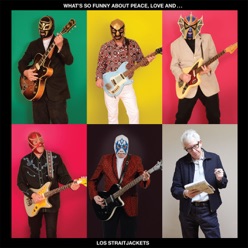