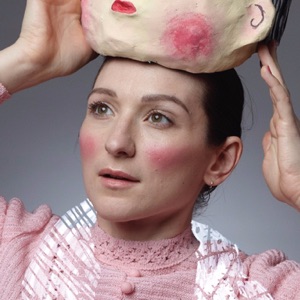 ORIGEN
New York, NY
Acerca de My Brightest Diamond
Mixing elements of opera, cabaret, chamber music, and rock, My Brightest Diamond was the project of singer/songwriter/multi-instrumentalist Shara Worden. The daughter of a National Accordion Championship-winning father and a mother who was an organist for their Pentecostal church, Worden grew up in Ypsilanti, Michigan, listening to gospel, jazz, and classical music and performing in the church choir. She studied opera at the University of North Texas' music program, and after graduation, moved to New York City to continue her vocal studies. In N.Y.C., she became as involved in the world of underground rock as she was in the realms of classical music, becoming inspired by the likes of Antony and the Johnsons and Nina Nastasia and their intimate performances at venues such as Tonic, the Living Room, and the Knitting Factory. Worden began writing her own material, which had one foot in her classical training and the other in the avant rock she was discovering.nn She began performing and recording as Awry, gathering a supporting group of musicians playing everything from wine glasses to wind chimes, and eventually added a string quartet after studying and collaborating with Australian composer Padma Newsome. She released The Orange Album and Quiet B-Sides in 2001, and a remix album in 2003. After meeting fellow transplanted Michiganian Sufjan Stevens, she became one of his Illinoisemakers and took a hiatus from her own work to perform on his Illinois tour as cheerleading captain. When the tour was over, Worden renamed her project My Brightest Diamond and set to work on two albums: A Thousand Shark's Teeth, a collection of songs performed with a string quartet, and Bring Me the Workhorse, a more rock-oriented set that was released on Stevens' Asthmatic Kitty in summer 2006. My Brightest Diamond toured with Stevens that fall in support of the album. Early the following year, the remix album Tear It Down, which featured contributions from Lusine and Gold Chains, arrived. My Brightest Diamond's second album, 2008's A Thousand Shark's Teeth, was originally planned as a piece for a string quartet, but eventually included 20 players and drew on influences such as the works of Maurice Ravel and Tom Waits. Returning to her Detroit roots, My Brightest Diamond took inspiration from the Motor City's ups and downs for All Things Will Unwind. The album, released in fall 2011, featured songs composed for the acclaimed yMusic chamber ensemble. Worden resurfaced in July 2014 with the None More Than You EP, a precursor to that fall's full-length This Is My Hand, which boasted influences ranging from Top 40 pop hits to her experiences appearing in experimental director Matthew Barney's film The River of Fundament.~ Heather Phares