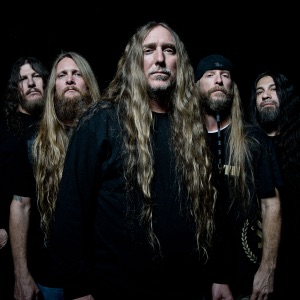 ORIGEN
Tampa, FL
FORMACIÓN
1986
Acerca de Obituary
Possessed and Death may have brought death metal to life, but Obituary brought it to fruition. After releasing some demos as Xecutioner as far back as 1986, the five-man band debuted as Obituary in 1989 with Slowly We Rot, and in a word, the album was a landmark. The previous forays into what would quickly become tagged as death metal -- primarily by the above-mentioned bands, Possessed and Death, along with grindcore innovators Repulsion and Napalm Death -- were exercises in relentlessness. These bands took the breakneck abandon of Slayer's Reign in Blood one step further, to the point of sheer, sometimes even ridiculous musical abandon. Obituary, on the other hand, varied their tempo considerably -- and did so at the absolute height of speed metal nonetheless.nn Yes, the band could play at breakneck speed, but within the same song, guitarists Allen West and Trevor Peres could slow the tempo down to dirge-like levels at a moment's notice, all the while keeping the music heavy as hell thanks to downtuned guitars and the snarling vocals of John Tardy. As a result, Slowly We Rot made quite a splash back in 1989, influencing an entire legion of death metal bands in Florida: Morbid Angel, Deicide, Malevolent Creation, Cannibal Corpse, and numerous others now forgotten among the thousands of international bands that followed. In a way, Slowly We Rot was the prototypical death metal album, establishing a template that would come to define the style (one that is distinct from grindcore or black metal, it should be pointed out).nnA few albums followed -- Cause of Death (1990) and The End Complete (1992), both also very influential -- but by the mid-'90s, Obituary had run their course and the band splintered, reuniting now and then. Yet even as the bandmembers went their separate ways (most notably West going on to much success as the guitarist in Six Feet Under), Obituary continued to stand tall as one of the definitive death metal bands, if not the definitive (a distinction that probably goes to Death, whose James Murphy was actually a bandmember for a while).nnA long period without recording ended in 2005 when the band released Frozen in Time. Although Xecutioners Return followed just two years later, it appeared on a different label (Candlelight instead of the band's perennial Roadrunner) and it was recorded without guitarist West (whose alcohol and drug problems led to his being replaced by Ralph Santolla of Millenium and Deicide fame). Darkest Day followed in 2009, also on Candlelight. Both Santolla and longtime bassist Frank Watkins (the latter of whom passed away in 2015 after battling cancer) left not long after, and in 2014 the band released its crowdfunded ninth album, Inked in Blood. It was the first Obituary album to feature Kenny Andrews on lead guitar and Terry Butler on bass. The album performed surprisingly well on the charts, resulting in Obituary's first appearance on the U.S. album charts. Two years later, the band issued Ten Thousand Ways to Die, which featured a pair of brand-new studio singles along with 12 live tracks. In 2017, Obituary released what would be their tenth studio album. The self-titled record drew widespread acclaim, with many critics noting a sense of renewed life in the band. ~ Jason Birchmeier