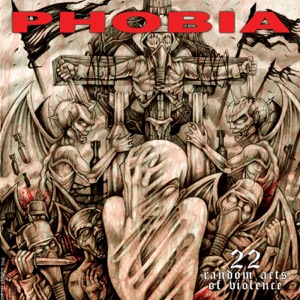 ORIGEN
Los Angeles, CA
FORMACIÓN
1990
Acerca de Phobia
A band on a mission to show that not all is sunny and bright in its native Orange County, California (or anywhere else on the planet, for that matter), Phobia are a grindcore/crust-punk outfit founded in 1990 by vocalist Shane McLachlan (who also picks up guitars, bass, and drums, as needed in the studio), guitarists Bruce Reeves and Zach Southall, and drummer Marco Soriano -- the first of many lineups. Still, personnel turnover never affected Phobia's relentless touring and recording schedules, which have seen them crisscross the U.S., Europe, and elsewhere, and have included numerous singles, EPs, and a slew of albums (short on length, but long on track listings) in 1998's Means of Existence, 2001's Serenity Through Pain, 2003's Grind Your Fucking Head In, 2006's Cruel, and 2008's 22 Random Acts of Violence. In 2010, Phobia -- now featuring McLachlan, guitarist Steve Burda, bassist Calum MacKenzie, and drummer Bryan Fajardo -- renewed their ties to their original label, Relapse Records, and unleashed a new EP entitled Unrelenting. The full-length Remnants of Filth and the Grindcore EP arrived in 2012 and 2014, respectively, and in 2017 the band released the sprawling four-disc box set/compilation Decades of Blastphemy. The politically charged Lifeless God was issued the following year via Willowtip. ~ Eduardo Rivadavia