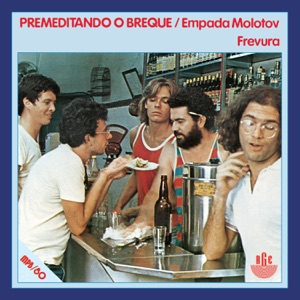 Acerca de Premeditando o Breque (Premê)
The work of the Premeditando o Breque defies rigid classifications. It is undeniably a referential, intellectualized humor group in the vein of the Argentinean Les Luthiers, or, drawing from cinema, Monty Python. Musically the Premê (as the group became popularly known) characterizes its work on the basis of instrumental virtuosity (having the strong guidance of the experienced musician/producer/arranger Mário Manga), using as vehicles for parodies virtually every genre/style, with an obvious preference for the kitschy ones but not refusing to employ samba, bossa nova, pop, rock and even modern classical music (the composer Igor Lintz Maués contributes to the group with his classical electronic compositions). Some of their biggest hits are "Garota de Copacabana," "Pinga com Limão" (a rock version of Alvarenga e Ranchinho's caipira song), "Lua-de-Mel em Cubatão," and "Rubens" (a homosexual love song which, banned by the censorship board in the '80s, was recorded in 1990 by Cássia Eller).nn One of the most important humor groups of São Paulo in the 1980s, the Premê was formed in 1976 by Mário Manga, Marcelo Galbetti, Claus, and Wandy Doratiotto, all of them students of the School of Communication and Arts (ECA) of the University of São Paulo. In 1979, the group participated in the I Festival Universitário da Música Popular Brasileira (University Festival of Popular Brazilian Music, TV Cultura, São Paulo), winning second place with "Brigando na Lua" (written by Manga). In 1980, they entered "Empada Molotov" (César Brunetti) in the MPB Shell Festival (TV Globo), recorded as a single. Their first LP came in 1981, Premeditando o Breque, having success with "Fim de Semana" and "Marcha da Kombi" (both by Doratiotto). In the next year, the group participated in the MPB Shell with "O Destino Assim o Quis" (Doratiotto), released as a single with "Pinga Com Limão." Having released in 1983 the LP Quase Lindo, which had success with "São Paulo, São Paulo," in 1985, they signed to the major-label EMI and released the LP O Melhor dos Iguais, which had hits with "Balão Trágico" (Manga/Dionísio Moreno) and "Lua-de-Mel em Cubatão." In the next year, Grande Coisa brought "Rubens," with the lyrics changed by determination of the censors. The original lyrics would be recorded by Cássia Eller four years later. The group participated in 1998 in the double-LP Há Sempre um Nome de Mulher, interpreting "Anamaria" (version by Hervê Cordovil), the album having sold over 350,000 copies. ~ Alvaro Neder