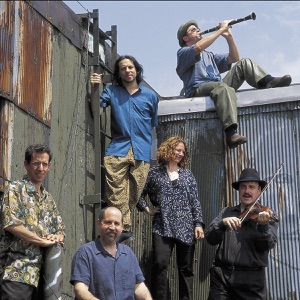 ORIGEN
New York City, NY
FORMACIÓN
1985
Acerca de The Klezmatics
The Klezmatics take one of the wildest approaches to klezmer, the traditional dance music of the Eastern European Jews. Although their music is heavily influenced by the recordings of Abe Ellstein and Dave Tarras in the 1940s and 1950s, their lyrics comment on a wide variety of political and social issues and have led the group to be labeled "the planet's radical Jewish roots band." The original members of the Klezmatics -- Dave Lindsay (bass), Rob Chavez (clarinet), Alicia Svigals (fiddle) -- were recruited through an ad in the Village Voice in 1985. Trumpet player Frank London of the Klezmer Conservatory Band joined the group soon afterward. Within a few weeks, the band was expanded with the addition of Lorin Sklamberg (vocals, accordion), Margot Leverett (clarinet), and David Licht (drums). Initially calling themselves "Hortzeplotz," they soon renamed themselves the Klezmatics, a play on words inspired by the rock band the Plasmatics.nn The group has undergone a number of personnel changes in its nearly three decades of existence, always retaining an adventurous spirit and discovering new angles to approach the heritage of klezmer music. Bassist Paul Morrissett (who also plays the tsimbl -- akin to a hammered dulcimer -- with the band) came on board at the invitation of Sklamberg prior to the recording of the Klezmatics' debut disc, 1988's Shvaygn = Toyt; meanwhile, guest reedman Matt Darriau contributed saxophone to that premier album (and to the group's third disc, 1995's Jews with Horns), becoming a full-fledged member (playing kaval, clarinet, and saxophone) prior to the recording of the group's fourth album, 1997's Possessed. Darriau, a bandleader and collaborator in a wide range of N.Y.C.-based world fusion ensembles, was also a member of the Celtic outfit Whirligig, and he was instrumental in bringing Whirligig violinist/vocalist Lisa Gutkin into the Klezmatics fold prior to the recording of their 2002 Rounder album Rise Up! Shteyt Oyf! October 2005 would see the recruitment of Herbie Hancock Quartet drummer Richie Barshay as the newest member of the Klezmatics, replacing longtime drummer David Licht. Barshay joined shortly after the recording of Wonder Wheel (which featured Kenny Wollesen on drums), an album seven years in the making that featured the late Woody Guthrie's lyrics over Eastern European, klezmer, Latin, Celtic, Afro-Caribbean, and folk-flavored music. Released by Jewish Music Group in 2006, Wonder Wheel won the following year's Grammy Award for Best Contemporary World Music Album. In Woody Guthrie's Happy Joyous Hanukkah, a companion volume to Wonder Wheel also issued by Jewish Music Group in 2006, the Klezmatics wrote and recorded new music to accompany a selection of Guthrie's Hanukkah lyrics that had been discovered in 1998.nnGiven their widely recognized musical virtuosity, it is unsurprising that the Klezmatics have recorded two albums with classical violinist Itzhak Perlman, 1995's In the Fiddler's House and 1996's Live in the Fiddler's House. In addition, they collaborated with Israeli vocalist Chava Alberstein on The Well, originally released by Xenophile in 1998 and reissued by Rounder in 2001. In 2008, two years after the release of the Woody Guthrie volumes, a Klezmatics best-of compilation entitled Tuml = Lebn was released by the Piranha label. The band independently issued the two-disc Live at Town Hall in 2011.nn In 2016, the Klezmatics -- now featuring Matt Darriau on kaval, clarinet, saxophone and vocals and Lisa Gutkin on violin and vocals, alongside veteran members Sklamberg, London, Morrissett, and Barshay -- released Apikorsim: Heretics, a new studio album. The group's first album with no guest artists or session players, the Klezmatics explained the title by declaring, "Apikorsim are people who challenge orthodox opinions" -- something the band have been doing their entire career. The album was released in time for an international tour celebrating the Klezmatics' 30th Anniversary. ~ Craig Harris u0026 Dave Lynch 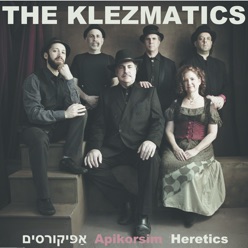 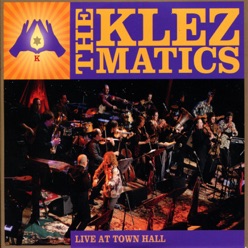 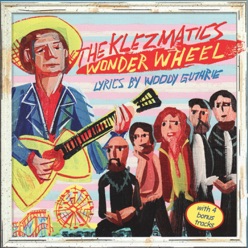