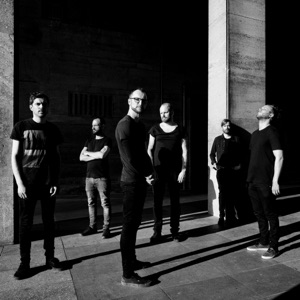 ORIGEN
Berlin, Germany
FORMACIÓN
2000
Acerca de The Ocean
Berlin-based the Ocean Collective (also known as the Ocean), is a forward-thinking extreme music ensemble led by founder, guitarist, composer, and conceptualist Robin Staps. Their sound is a hybrid comprised of progressive, atmospheric sludge, doom metal, and post-hardcore. Almost all of their music is conceptual, obsessed with geologic, pre-historic, and philosophical themes -- sonically, much of it is ferocious in execution, weaving organic and electronic sounds and samples. With an ever-changing lineup of various on-and-offstage musicians and visual artists, the relentlessly touring group have become well-known for their immense, mind-expanding live shows. Since 2005, their releases have been issued by Metal Blade in the U.S. and their own Pelagic label in Europe. Their best-known offering, 2007's Precambrian, is musically brutal and intellectually brainy; its songs are steeped in arcane and scientific knowledge of the earth's geology.nn In 2000, Staps surrounded himself with fellow guitarist Andreas Hillebrand, bassist Jonathan Heine, drummer Torge Liessmann, percussionist Gerd Kornmann, and a variety of individually specialized vocalists, including Nico Webers, Sean Ingram, Nate Newton, Thomas Hallbom, and Carsten Albrecht. Inspired in part by the progressive explorations of Americans Neurosis, and wishing to compose brutal heavy metal containing lighter, atmospheric elements under strictly orchestrated parameters, the group issued two demos in 2002 Islands/Tides and Queen of the Food-Chain. They signed to Make My Day for 2003's five-track extended EP Fogdiver and followed it up with Fluxion in 2004. By this time, dozens of different musicians had been through the band's ranks. 2006's Aeolian -- recorded at the same session as its predecessor -- was their debut for Metal Blade. Both albums have been described as "doom soundtracks." The hard-hitting, prog-tinged Precambrian arrived in 2007 and signaled the beginning of the Ocean's modern era. A double album, it combined sludge with progressive music and a grandiose, sometimes orchestral vibe clothed in extreme, visceral heaviness. For 2010's Heliocentric and Anthropocentric (released just five months apart), vocalist Loïc Rossetti (who sings rather than growls) replaced Albrecht and helped to shift the band's focus toward a more spacious approach with larger textural and dynamic shifts. In April of 2013, the Ocean released their most ambitious undertaking yet in Pelagial. Written to be performed as a single 53-minute conceptual work, its various sections virtually interact with one another. The package contained both vocal and instrumental versions of the album. The Ocean underwent lineup changes after the album and during its five-year tour. Drummer Luc Hess was replaced by Paul Seidel, and Australian guitarist Damian Murdoch took over from Jonathan Nido. They also added cello player Dalai Theofilopoulou, pianist Vincent Membrez, and Peter Voigtmann on synths. Their first release with the extended roster was Transcendental, a split album with Japan's Mono, issued as a preview to a joint European tour (the Ocean were still touring Pelagial), and to celebrate that Mono had signed to Pelagic. The long player included one extended track from each outfit. "The Quiet Observer," the Ocean's contribution, was based on Gaspard Noe's controversial film Enter the Void. The split was issued at the end of October. After the Pelagial tour finally ended, Staps, as was his custom, retired to a secluded cabin near the ocean and wrote the band's next album.nn The Ocean entered the studio in February of 2018 and began recording the two-part Phanerozoic. Based on the eon that succeeded the Precambrian supereon and spanning a 500-million-year period leading to the present day; it witnessed the evolution and diversification of plant and animal life on Earth, and the partial destruction of it during five mass extinction events. Conceptually and musically, the double-length Phanerozoic marked the band's first look back; it is the missing link between the albums Precambrian and Heliocentric/Anthropocentric, and was designed to be released over two different years. Recorded and mixed by Jens Bogren, the set's first single, "Devonian," also featured Katatonia's Jonas Renkse on lead vocals. Phanerozoic I: Palaeozoic was issued in November of 2018, with the second part due in early 2020. ~ Eduardo Rivadavia