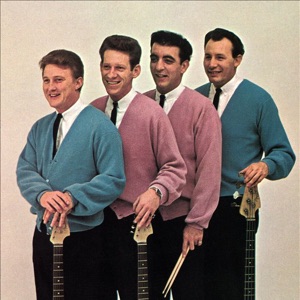 ORIGEN
Tacoma, WA
FORMACIÓN
1959
Acerca de The Ventures
Not the first but definitely the most popular rock instrumental combo, the Ventures scored several hit singles during the 1960s -- most notably "Walk-Don't Run" and "Hawaii Five-O" -- but made their name in the growing album market, covering hits of the day and organizing thematically linked LPs. Almost 40 Ventures' albums charted, and 17 hit the Top 40. And though the group's popularity in America virtually disappeared by the 1970s, their enormous contribution to pop culture was far from over; the Ventures soon became one of the most popular world-wide groups, with dozens of albums recorded especially for the Japanese and European markets. They toured continually throughout the 1970s and '80s -- influencing Japanese pop music of the time more than they had American music during the '60s.nnThe Ventures' origins lie in a Tacoma, Washington group called the Impacts. Around 1959, construction workers and hobby guitarists Bob Bogle and Don Wilson formed the group, gigging around Washington state and Idaho with various rhythm sections as backup. They recorded a demo tape, but after it was rejected by the Liberty Records subsidiary Dolton, the duo founded their own label, Blue Horizon. They released one vocal single ("Cookies and Coke"), then recruited bassist Nokie Edwards and drummer Skip Moore and decided to instead become an instrumental group.nnThe Ventures went into the studio in 1959 with an idea for a new single they had first heard on Chet Atkins' Hi Fi in Focus LP. Released on Blue Horizon in 1960, the single "Walk-Don't Run" became a big local hit after being aired as a news lead-in on a Seattle radio station (thanks to a friend with connections). In an ironic twist, Dolton Records came calling and licensed the single for national distribution; by summer 1960, it had risen to number two in the charts, behind only "It's Now or Never" by Elvis Presley. After Howie Johnson replaced Moore on drums, the Ventures began recording their debut album, unsurprisingly titled after their hit single.nnTwo singles, "Perfidia" and "Ram-Bunk-Shush," hit the Top 40 during 1960-61, but the Ventures soon began capitalizing on what became a trademark: releasing LPs which featured songs very loosely arranged around a theme implied in the title. The group's fourth LP, The Colorful Ventures, included "Yellow Jacket," "Red Top," "Orange Fire" and no less than three tracks featuring the word "blue" in the title. The Ventures put their indelible stamp on each style of '60s music they covered, and they covered many -- twist, country, pop, spy music, psychedelic, swamp, garage, TV themes. (In the '70s, the band moved on to funk, disco, reggae, soft rock and Latin music.) The Ventures' lineup changed slightly during 1962. Howie Johnson left the band, to be replaced by session man Mel Taylor; also, Nokie Edwards took over lead guitar with Bob Bogle switching to bass.nnOne of the few LPs not arranged around a theme became their best-selling; 1963's The Ventures Play Telstar, The Lonely Bull featured a cover of the number one instrumental hit by the British studio band the Tornadoes and produced by Joe Meek. Though their cover of "Telstar" didn't even chart, the album hit the Top Ten and became the group's first of three gold records. A re-write of their signature song -- entitled "Walk-Don't Run '64" -- reached number eight that year. By the mid-'60s however, the Ventures appeared to be losing their touch. Considering the volatility of popular music during the time, it was quite forgivable that the group would lose their heads-up knowledge of current trends in the music industry to forecast which songs should be covered. The television theme "Hawaii Five-O" hit number four in 1969, but the Ventures slipped off the American charts for good in 1972. Instead, the band began looking abroad for attention and -- in Japan especially -- they found it with gusto. After leaving Dolton/Liberty and founding their own Tridex Records label, the Ventures began recording albums specifically for the Japanese market. The group eventually sold over 40 million records in that country alone, becoming one of the biggest American influences on Japanese pop music ever.nnNokie Edwards left the Ventures in 1968 to pursue his interest in horse racing for a time, and was replaced by Gerry McGee; though he returned by 1972, Mel Taylor left the group that year for a solo career, to be replaced by Joe Barile. (Taylor also returned, in 1979.) By the early '80s, the Ventures' core quartet of Wilson, Bogle, Edwards, and Taylor could boast of playing together for over 20 years. Edwards left the band for good in 1984 (replaced again by Gerry McGee), and the following decades were marked by the deaths of several of the group's earliest members -- Mel Taylor died midway through a Japanese tour in 1996 (replaced by his son Leon), co-founder Bob Bogle died in 2009, and Nokie Edwards himself died in 2018 -- yet latter-day incarnations of the Ventures continued to pack venues around the world. ~ John Bush