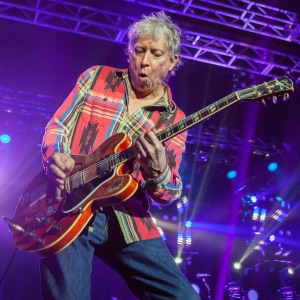 CIUDAD NATAL
Glendale, CA
NACIMIENTO
21 de octubre de 1942
Acerca de Elvin Bishop
A veteran guitarist who fused the blues with gospel, Ru0026B, and country traditions, Elvin Bishop was born in Glendale, California, on October 21, 1942. He grew up on a farm in Iowa with no electricity or running water, and eventually moved to Oklahoma with his family when he was ten. Raised in an all-white community, his only exposure to African-American traditions was the radio, which introduced him to the sounds of blues stations in Shreveport, Louisiana. The piercing sound of Jimmy Reed's harmonica won his attention; Bishop would later liken it to a crossword puzzle that he had to figure out. What was this music? Who made it? What was it all about? Inspired, he began to put the pieces together.nn However, it wasn't until he won a National Merit Scholarship to the University of Chicago in 1959 that Bishop found the real answers to his questions. He found himself in the middle of the Chicago blues scene and immersed himself in the genre. After two years of college, Bishop dropped out and pursued music full-time, eventually meeting Howlin' Wolf's guitarist Smokey Smothers and learning the basics of blues guitar from him. In the early '60s, Bishop teamed up with Paul Butterfield helped form the core of the Butterfield Blues Band. Although he had only played guitar for a few years, he practiced frequently and played with Butterfield in just about every place possible, including campuses, houses, parks, and -- in the venue that helped launch the band -- Big John's on Chicago's North Side. Bishop also helped shape the sound of several Butterfield albums, including The Pigboy Crabshaw, whose title refers to Bishop's countrified persona.nnIn 1968, Bishop left Butterfield's band following the release of In My Own Dream. He launched a solo career and relocated to the San Francisco area, where he made frequent appearances at the Filmore with artists like Eric Clapton, B.B. King, Jimi Hendrix, and the Allman Brothers Band. Bishop recorded four albums for Epic Records and later signed with Capricorn in 1974. His recording of "Traveling Shoes" (from the album Let It Flow) made a dent on the charts, but the single "Fooled Around and Fell in Love" (from Struttin' My Stuff) made a bigger splash in 1976 when it peaked at number three on the Billboard charts. Over the next few years, the Elvin Bishop Group dissolved. He released his album Best Of in 1979 and laid low for several years, eventually resurfacing when he signed with the Alligator label in 1988.nn Bishop then released Big Fun in 1988 and Don't Let the Bossman Get You Down in 1991, both of which were well-received. He also participated in Alligator's 1992 20th Anniversary cross-country tour; three years later, he toured with veteran bluesman B.B. King and released an album entitled Ace in the Hole. The Skin I'm In followed in 1998, and 2000's That's My Partner saw him teaming up with Smokey Smothers, the same musician who had originally taught him guitar. After a five-year hiatus, Bishop released Gettin' My Groove Back in 2005 via Blind Pig Records; he then jumped to the Delta Groove Music label for 2008's The Blues Rolls On, which featured guest spots by B.B. King, Warren Haynes, Derek Trucks, and others. Red Dog Speaks (the title refers to his beloved red 1959 ES- 345 Gibson guitar), arrived in 2010, with the joyous and gritty Can't Even Do Wrong Right appearing in 2014. ~ Michael Erlewine u0026 Steve Leggett 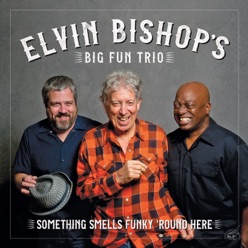 Something Smells Funky 'Round Here
2018 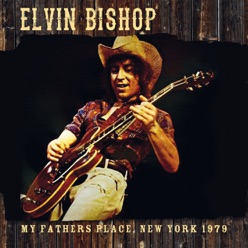 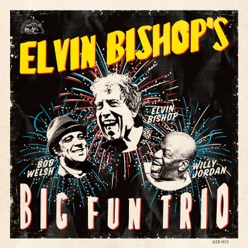