CIUDAD NATAL
Shreveport, LA
NACIMIENTO
12 de junio de 1977
Acerca de Kenny Wayne Shepherd
Kenny Wayne Shepherd and his group exploded on the scene in the mid-'90s and garnered huge amounts of radio airplay on commercial radio, which historically has not been a solid home for blues and blues-rock music, with the exception of Stevie Ray Vaughan in the mid-'80s. Shepherd was born June 12, 1977, in Shreveport, Louisiana. The Shreveport native began playing at age seven, figuring out Muddy Waters licks from his father's record collection (he has never taken a formal lesson). At age 13, he was invited on-stage by New Orleans bluesman Brian Lee and held his own for several hours; thus proving himself, he decided on music as a career. He formed his own band, which featured lead vocalist Corey Sterling, gaining early exposure through club dates and, later, radio conventions.nn Shepherd's father/manager used his own contacts and pizzazz in the record business to help land his son a major-label record deal with Irving Azoff's Giant Records. Ledbetter Heights, his first album, was released two years later in 1995 and was an immediate hit, selling over 500,000 copies by early 1996. Most blues records never achieve that level of commercial success, much less ones released by artists who are still in their teens. Although Shepherd -- who has been influenced by (and has sometimes played with) guitarists Stevie Ray Vaughan, Albert King, Slash, Robert Cray, and Duane Allman -- is definitely a performer who thrives in front of an audience, Ledbetter Heights was impressive for its range of styles: acoustic blues, rockin' blues, Texas blues, Louisiana blues. The only style that he doesn't tackle is Chicago blues, owing to Shepherd's home base being smack dab in the middle of the Texas triangle.nn Released in 1998, Trouble Is... earned a Grammy nomination and Live On followed a year later. In 2004 The Place You're In was released on Reprise Records, and was the first album to feature Shepherd doing the majority of the lead vocals (singer Noah Hunt handled the lead vocals on the previous two albums). Shepherd's next project saw him traveling in the American South with a documentary film crew and a portable recording studio as he backed up several veteran blues players on their home turf. The resulting album and film, 10 Days Out: Blues from the Backroads, appeared in 2007 before Live! In Chicago followed in 2010. That November, Shepherd joined Jimmy Fallon's house band on TV for an evening, and performed with the same Fender Stratocaster that Jimi Hendrix had played at Woodstock.nnAlthough Shepherd had kept busy in the intervening years, 2011's How I Go was his first studio album proper in a seven-year period. In an attempt to revive the success of 1998's Trouble Is..., he once again recruited Noah Hunt on vocals, as well as former Talking Heads keyboard player and guitarist Jerry Harrison, who had produced the sessions for that platinum-selling album. Shepherd followed How I Go with 2014's Goin' Home, a tribute to his musical heroes that featured contributions from artists such as Ringo Starr and Keb' Mo'. The Kenny Wayne Shepherd Band returned in 2017 with Lay It on Down, a record cut in Shreveport, Louisiana's Echophone Studios. ~ Steve Huey u0026 Richard Skelly 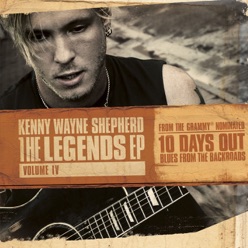 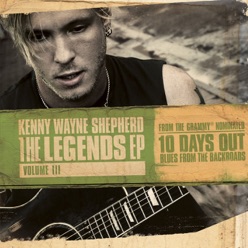