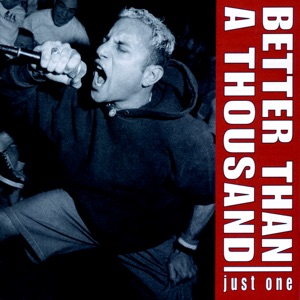 Acerca de Better Than A Thousand
Better Than a Thousand was essentially a side project that, like many such projects in the hardcore punk scene, eventually took on a life of its own. The group's genesis lay in the creative duo of guitarist/songwriter Graham Land and drummer Ken Olden, a Washington, D.C.-area straight-edge kid who played guitar for the straight-edge revival outfit Battery and the decidedly metal Damnation AD. The two of them desired to craft a body of songs that recalled the spirit of the bygone "youth crew" era of positive-thinking espousing, fast-paced moving, sing-a-long inducing hardcore. They made a bunch of songs and thought, "who better to sing on this than Ray Cappo?" Cappo had virtually led the genre through it's previous incarnation, fronting straight-edge flag wavers Youth of Today, before disbanding the group to devote his life to being a Hare Krishna monk and preaching the religion's ideas through the band Shelter. Shelter played hardcore music for a time, but had by that point evolved into something much slicker and more commercial, so Cappo jumped at the chance to revisit his past barking-vocal style. He enthusiastically laid down all of his parts in two days, in a bedroom studio setup. His voice can even be heard getting noticeably hoarse by the end of Just One, Better Than a Thousand's debut album, released in July 1997 through Revelation Records. The group began touring when it could, between its members full-time projects' schedules. They even released a second album, Value Driven, in the late '90s, before quietly dissolving, partially over Cappo's decision to abandon the straight-edge lifestyle. ~ Ryan J. Downey

Better Than A Thousand en Abril