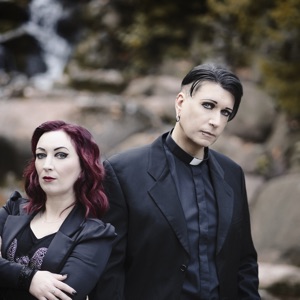 ORIGEN
Germany
FORMACIÓN
1992
Acerca de Blutengel
The German group Blutengel (Blood Angel) were founded by singer Chris Pohl, after contractual and legal problems forced him to exit the popular German band Seelenkrank. An electronica pop group with goth overtones, the band has gone through a few member changes while sticking to a configuration of one male and two female singers. They sing in German and in English, with lyrics exploring love, passion, and romance in highly dramatic tones. The original two female singers were photographer and singer Nina Bendigkeit (another Seelenkrank alumni) and Katie Roloff. Bendigkeit left after the debut album, Child of Glass, was released to modest club success in 1999, to devote time to her growing success as a photographer. It was an amicable parting, as Bendigkeit would later work on the band's publicity materials; she was replaced as a vocalist by Gini Martin. The next album, Seelenschmerz, continued to develop the band's fan base in Germany, with several singles garnering airplay; it was enough for Pohl and the group to finally perform live, and their debut performance was for 10,000 fans at a festival in Leipzig. The success strained relationships in the band, and in 2001 both Roloff and Martin left Blutengel to found the group Tristesse de la Lune, stating that Pohl's leadership had become overbearing. They were replaced by Eva Pölzing and session singer Constance Rudert.nn The next album proved to be the band's breakthrough in Germany -- Angel Dust placed 58th in the Top 100 albums of the year, and the singles "Angel of the Night" and "Vampire Romance" were national hits. Pohl retooled their live show, turning it into a theatrical spectacle, featuring dancers, pyrotechnics, and melodramatic gothic sets and costumes. Only the three singers and dancers were visible to the audience, as the musicians were either hidden or taped. They became darlings of the European electronic festival circuit, and steadily built an ever larger fan base. Another album and a live concert DVD followed, and the band finally toured overseas, visiting the U.S.A., Mexico, and England in 2005, and gaining a U.S. release for the CD Demon Kiss. In 2005 Eva Pölzing left the group for personal reasons, and was replaced by Ulrike Goldmann. The constant lineup changes did not bother the group's fan base and sales from their albums continued to grow with each new release. Beginning with 2007's Labyrinth, Blutengel began a slow rise to the top of the charts, culminating with 2013's Monument, which reached number four on the German charts. That same year the group also released a new live DVD, Once in a Lifetime. ~ Laurie Mercer