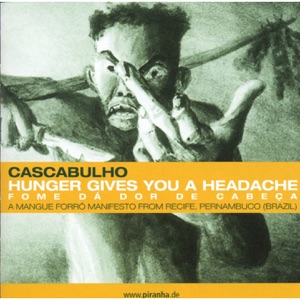 FORMACIÓN
1995
Acerca de Cascabulho
Influenced by coco master Jackson do Pandeiro, Cascabulho was celebrated by many artists as a well-succeeded initiative of bridging the gap between Pandeiro's music and today's world music. The local name is derived of the varied mixture of fruit skins and diverse hulls given to pigs. The group emerged after the success of Chico Science u0026 Nação Zumbi and Mundo Livre S.A.'s mangue beat movement, which made it possible for rootsy works to be assimilated by the mainstream pop market. Not a rock or pop band, the genres played by Cascabulho are rojão, coco, maracatu, xangô, and batuque.nn In 1996, Cascabulho was presented by the serious folklorist Antônio Nóbrega when they were releasing their album/musical show Na Pancada Do Ganzá in a street parade with a trio elétrico. In 1997, the band became nationally known. They were considered the revelation of the fifth Abril Pro Rock festival (1997), shared with names like Jorge Cabeleira, Devotos do Ódio, Dona Margarida Pereira, Faces do Subúrbio, Selma do Coco, Paulo Francis Vai Pro Céu, Eddie, and others. In the same year, the group performed in the five-day festival at New York's Central Park, The Brazilian Muzic (sic) Festival, receiving favorable international reviews. The festival was recorded and broadcast worldwide with interviews with the artists (Daúde, Zélia Duncan, Mestre Ambrósio, Hermeto Pascoal, Lenine, Marcos Suzano, and others). Also, in the same year, the group performed in the Free Jazz Festival (Rio). In 1998, they performed in São Paulo to promote their debut album, Fome Dá Dor De Cabeça, followed by other Brazilian capitals. The album had basically hits by Jackson in the forró genre of the '40s, '50s, and '60s ("Sebastiana," "Canto Da Ema," "Forró Em Limoeiro," "Como Tem Zé Na Paraíba") and vignettes paying tribute to other important Northeastern composers (like Luiz Gonzaga and Tom Zé).nn In May 1998, Cascabulho was invited to play during the ceremony of the delivery of the 11th Prêmio Sharp de Música, which paid homage to Jackson do Pandeiro. In April 1998, the band was again featured in the sixth edition of the Abril Pro Rock. In the next year, Cascabulho participated on the double-CD Reiginaldo Rossi -- Um Tributo (Mangroove/Abril Music) with "Deixa De Banca." In the same year, the band participated in the Womex 99 fair in Berlin, Germany. There they arranged a tour through six important European festivals, in countries like Germany, Belgium, Denmark, and Spain. In 1999, they participated in the Jackson do Pandeiro tribute Jackson do Pandeiro Revisto E Sampleado, together with Geraldo Azevedo, Zé Ramalho, Marinês, Elba Ramalho, and other artists. In 1999, they performed again in the Abril Pro Rock Festival in Recife and had their debut album awarded with the Prêmio Sharp de Música in the regional category. The song "Quando Sonhei Que Era Santo" got another Sharp prize, also in the regional category. In May 2000, Cascabulho played in the 31st New Orleans Jazz u0026 Heritage Festival, along with other Brazilian artists Hermeto Pascoal, Chico César, Carlos Malta u0026 Pife Muderno, Ilê Ayiê, and Maracatu Nação Pernambuco. Soon after the event, which attracted 514,000 people, Silvério Pessoa departed for his solo career, but the band continued its activities, with Kléber Magrão taking the lead vocals and calling saxophonist Alexandre Ferreira and percussionists Guga Santos and Zé Manuel (former member of Naná Vasconcelos' band). Fome Dá Dor De Cabeça, the debut CD, was released in Europe through the German label Piranha Records and in Japan through Nikita Records. ~ Alvaro Neder 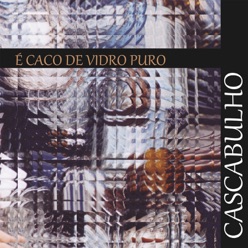 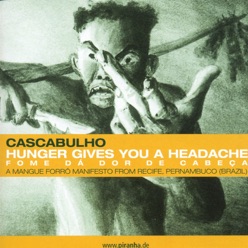 Hunger Gives You a Headache
2000