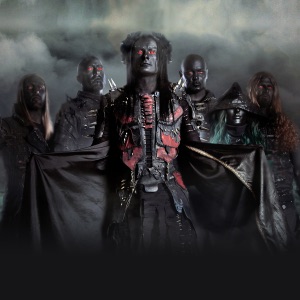 ORIGEN
Suffolk, England
FORMACIÓN
1991
Acerca de Cradle Of Filth
British black metal band Cradle of Filth formed in 1991, originally comprised of vocalist Dani Filth (born Daniel Lloyd Davey), guitarist Paul Ryan, his keyboardist brother Benjamin, bassist John Richard, and drummer Darren. After recording a demo dubbed Invoking the Unclean a year later, the group recruited guitarist Robin Eaglestone, who quit soon after recording a second demo, Orgiastic Pleasures; however, when Richard exited the band a short time later, Eaglestone stepped back in to assume bass duties, opening the door for guitarist Paul Allender. Following a third demo, Total Fucking Darkness, Cradle of Filth -- with new drummer Nicholas Barker -- signed with the Cacophonous label, issuing their proper debut, The Principle of Evil Made Flesh, in mid-1994.nn The lineup changes continued when the Ryan brothers both departed to form the Blood Divine (and Allender left as well), making room for guitarists Stuart Antsis and Jared Demeter and keyboardist Damien Gregori to debut on the 1996 mini-LP Vempire or Dark Faerytales in Phallustein. For the full-length Dusk and Her Embrace later that same year, Gian Pyres took Demeter's spot, and afterward, Gregori was replaced by keyboardist Les Smith; at any rate, the album substantially expanded the group's growing cult following. COF's next effort, Cruelty and the Beast, appeared in 1998, amid the group's steadily growing reputation for elaborate Alice Cooper/Marilyn Manson-style concert theatrics. Two years later the group returned with From the Cradle to Enslave, an EP that featured new drummer Adrian Erlandsson (formerly of Sweden's At the Gates and the Haunted), as Barker had departed to join Dimmu Borgir.nn The band's dizzying lineup changes continued apace as Paul Allender rejoined the group and Martin Powell (ex-Anathema and My Dying Bride) replaced Smith on keyboards for the full-length Midian, which was appropriately released on Halloween 2000. Bitter Suites to Succubi was issued on Spitfire in summer 2001. The group added a choir and orchestra to the lineup for 2003's Damnation and a Day on Red Ink, and moved to Roadrunner for 2004's Nymphetamine. Thornography followed on Roadrunner in 2006, a year that also saw the release of The Cradle of Filth Box Set. Eleven Burial Masses, a collection of live material, arrived in 2007, followed by the concept album Godspeed on the Devil's Thunder in 2008, which saw Erlandsson replaced by new drummer Martin "Marthus" Škaroupka.nnIn 2010, the band left Roadrunner, signing to Peaceville in Europe and Nuclear Blast in the U.S. for the release of its ninth studio album, Darkly, Darkly, Venus Aversa, a concept album that focused on the myth of the demon Lilith, the alleged first wife of the biblical Adam. It was the first Cradle album not to contain any instrumental tracks, and also featured the sole appearance with the band of keyboardist Ashley Ellyllon, formerly of Abigail Williams. In 2012, reduced to the trio of Filth, Allender, and Škaroupka, the band released The Manticore and Other Horrors, on which they did a bit of a turnabout, returning female vocals and hardcore punk riffs to the fore. A deluxe, remastered, and expanded edition of their early demo, Total Fucking Darkness, was slated for release in May 2014, featuring additional, previously unreleased tracks, proved a stopgap.nnCradle of Filth's Hammer of the Witches was announced in May of 2015, marking the first new music from the group in three years -- the longest gap in their career. It featured a new lineup that included guitarists Marek Ashok Šmerda and Richard Shaw (marking a return to twin-guitar harmonies) and new keyboardist/female vocalist Lindsay Schoolcraft. The video for "Right Wing of the Garden Triptych" was released in May, followed by online streams of "Deflowering the Maidenhead, Displeasuring the Goddess," and "Enshrined in Crematoria" in late June. The album was released in mid-July.nn Cradle of Filth announced their 12th album Cryptoriana: The Seductiveness of Decay in June 2017. It was produced by longtime collaborator Scott Atkins in Suffolk.nnIn interview, Dani Filth stated: "The album is deeply infused with Victorian gothic horror and thus the title is a reflection of that. 'Cryptoriana' implies the Victorian's infatuation with the supernatural, the grave, and the ghoulish, while the subtitle 'The Seductiveness of Decay' further cements this attraction to death and the glittering, lengthy process of self-annihilation." The set was issued in September while the band was already promoting it on tour. ~ Jason Ankeny