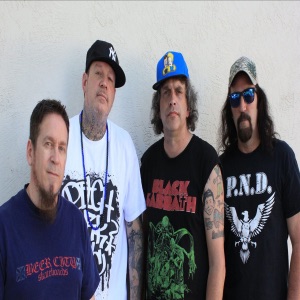 ORIGEN
Houston, TX
FORMACIÓN
mayo de 1982
Acerca de D.r.i.
D.R.I. (aka Dirty Rotten Imbeciles) were one of the first bands to fuse hardcore punk with thrash metal, along with Suicidal Tendencies and Corrosion of Conformity. Starting off as a speedy, straight-ahead punk band, they gradually mixed more elements of heavy metal into their sound; as they did so, their songs got longer and featured more sections and more variety in tempo. D.R.I. managed the then-rare feat of crossing over to metal audiences while retaining their skatepunk and hardcore fan bases -- they had something for all those audiences to love (or hate). Vocalist Kurt Brecht and guitarist Spike Cassidy were the two constants throughout the band's frequent lineup shifts, and kept them going for well over a decade.nnD.R.I. were formed in Houston, TX, in May 1982, evolving out of a defunct hardcore band called the Suburbanites. Singer Kurt Brecht, drummer Eric Brecht (his brother), and bassist Dennis Johnson had all played in that outfit, and with new guitarist Spike Cassidy in tow, they renamed themselves Dirty Rotten Imbeciles, after a frequent insult from the Brechts' father (who objected vehemently to their rehearsals). The band was soon performing live around Houston, and before the end of the year, they issued a 22-song debut, Dirty Rotten EP, on their own Rotten label. Pressed in limited quantities, it was reissued as a 12" LP in 1983, appropriately retitled Dirty Rotten LP. The wider exposure for this version helped make the group's name in the punk underground, and after a supporting tour that year, they relocated to San Francisco.nnThe going was rough at first, and bassist Johnson quit to return home to Houston. He was replaced by Sebastian Amok for a tour with the Dead Kennedys, after which Amok was in turn replaced by Josh Pappé for the 1984 EP Violent Pacification. Eric Brecht also left the band later that year to get married; he would soon join Hirax. In the meantime, D.R.I. replaced him with Felix Griffin. During the recording of the band's second album, 1985's Dealing With It, Pappé took a leave of absence to deal with a drug problem. Mikey Offender, of the Offenders, filled in for him during the remainder of the sessions, and the album was released on the Death label. With Hirax's help, D.R.I. scored a deal with Metal Blade, and a substantial buzz built around the group, especially when Slayer drummer Dave Lombardo praised them in an interview.nnD.R.I.'s Metal Blade debut arrived in 1987 in the form of the boundary-blurring Crossover, whose title made their punk-metal fusion ambitions crystal clear. Their songs were growing from short bursts of speed into full-fledged, multisectioned compositions, and their unification of the two genres was the most seamless of their career. On the 1988 follow-up, 4 of a Kind, the metal influences began to predominate, even if the band's hardcore roots were still audible. Buoyed by the video for "Suit and Tie Guy," 4 of a Kind became the first D.R.I. album to make the national charts. The following year, Pappé accepted an offer to join Gang Green, and was replaced in D.R.I. by John Menor, formerly of Mantas. Menor made his debut on 1989's Thrash Zone, the band's most metallic offering yet, and one that was also widely acclaimed among their best. "Beneath the Wheel" and "Abduction" landed some airplay on MTV, and the album became their second straight to chart.nnThrash Zone proved to be the band's final effort for Metal Blade, however, and Felix Griffin departed in 1990, effectively bringing D.R.I.'s most successful period to a close. After a couple of short-lived replacements, Griffin's slot was filled by Rob Rampy IV, and Spike Cassidy revived the band's Rotten label to release 1992's Definition. By this time, the alternative explosion had substantially reduced the audience for thrash, and Definition accordingly looked back on the band's punk roots; still, much of their old audience had evaporated. After recording the late-1992 gig that was eventually released as the Live album, Menor left the band and was replaced by Chumly Porter. Porter made his debut on the 1995 studio set Full Speed Ahead, and the band spent the next few years touring, even if there was no new product to speak of. Porter left in 1999 and was replaced by Harald Oimoen, who helped continue D.R.I.'s road-warrior existence. ~ Steve Huey