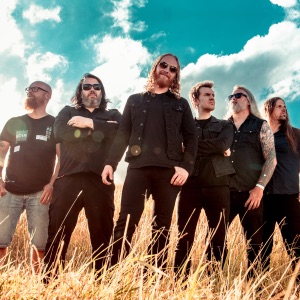 ORIGEN
Billdal, Sweden
FORMACIÓN
1989
Acerca de Dark Tranquillity
Toward the end of the '90s, Scandinavian death metal -- or at least one branch of it -- began to evolve into a more accessible amalgamation of death metal intensity, a bit of progressive metal experimentation, and more traditional late-'70s/early-'80s British metal, with its catchy, groove-oriented riffs and twin-guitar lead lines. Although the style was hardly confined to one place, there was an especially fertile scene centered in the Swedish city of Gothenburg, and Dark Tranquillity were one of its most prominent practitioners. Formed in 1989, Dark Tranquillity honed their chops for a few years and debuted on record in 1993 with the album Skydancer; their lineup consisted of vocalist Anders Freiden, guitarists Niklas Sundin and Mikael Stanne, bassist Martin Hendriksson, and drummer Anders Jivarp. The band shuffled its membership for the 1995 follow-up EP Of Chaos and Eternal Night; upon Freiden's departure, Stanne took over lead vocals and was replaced on guitar by Fredrik Johansson. This lineup remained intact for the full-length The Gallery issued later that year, which helped begin to build an international fan base.nn Follow-ups Enter Suicidal Angels (an EP) and the full-length The Mind's I appeared in 1997, marking a tightening of the group's sound into a more compact attack; in 1999, Dark Tranquillity departed the Osmose label in favor of a deal with Century Media, which was consummated with the release of the more goth-flavored Projector later that year. Electronics manipulator Martin Brändström subsequently joined the group as an official member and guitarist Johansson departed; bassist Hendriksson took over for him on guitar, and his spot was in turn filled by Michael Niklasson. Haven was released in mid-2000, continuing the less traditional approach of its predecessor. Afterwards, the band would continue moving in a heavier direction with 2002's Damage Done and 2005's Character, which found the band getting more atmospheric and aggressive. In 2007 they decided to split the difference between the old and the new, bringing back Stanne's melodic vocals but retaining the heavier sound for the album Fiction. In 2010, Dark Tranquillity released We Are the Void, followed in 2013 by the critically acclaimed Construct. 2016 saw both the departure of longtime bassist/guitarist Martin Henriksson and the release of the band's eleventh studio long-player, Atoma. ~ Steve Huey