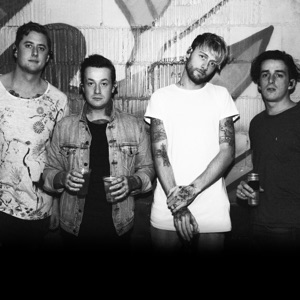 ORIGEN
Norfolk, England
FORMACIÓN
2005
Acerca de Deaf Havana
Norfolk, England rock outfit Deaf Havana debuted with a sound that combined post-hardcore with anthemic pop-punk, akin to contemporaries like We Are the Ocean, the Blackout, and Young Guns. Later, their sound would change drastically, echoing the hard rock anthems of acts like Daughtry, Shinedown, and Lifehouse.nn Formed in 2005 while the band -- lead vocalist Ryan Mellor, guitarists James Veck-Gilodi and Sebastian Spitz (later replaced by Chris Pennells), bassist Lee Wilson, and drummer Tom Ogden -- were students at college in Kings Lynn, Deaf Havana signed to A Wolf at Your Door Records in 2008. A year later, they recorded their first album, Meet Me Halfway, At Least, with producer Matt O'Grady (You Me at Six). Mellor parted ways with the band due to personal reasons prior to the recording of their sophomore release and was replaced by Veck-Gilodi on lead vocals. Fools and Worthless Liars was released in 2011 and marked the start of their sonic shift. They released a deluxe version of the album with a bonus disc of the entire LP re-recorded in a stripped-back acoustic manner that brought out the musicianship and emotion of their usually aggressive sound. They added Veck-Gilodi's brother Matthew to bolster their guitar options, on both acoustic and electric, and also installed Max Britton on piano to further expand their sound.nn Sessions for their third record followed Deaf Havana's acoustic shows at London's intimate Union Chapel, and in 2013, Old Souls was issued. Their sound had shifted even further from the heavy riffs of their debut to a more considered pop/rock sound, complete with Springsteen references and harmonized choruses. After the release of Old Souls, the band almost broke up, but decided to persevere. Four years later, they released their fourth studio album, All These Countless Nights, in January 2017. ~ Scott Kerr u0026 Neil Z. Yeung