March Of The Dead

Hooded figures dressed in black, drifting through the night.
Chanting softly moving slowly bathed in moonlight.
Arms outstretched with fingers groping, walking all in line
From gaping coffins emerge these shadows, awakened for all time,
Witches and Warlocks rising from the grave,
Vampires and sorcerers, from a bygone age.

Up in front the awesome creature marching at their head,
Satan beckons ever onward his army of undead.
Charred limbs heave their mindless bodies through the mists of time.
Sightless sockets follow blindly their leaders pointing arm,
Burning and torture these beings had endured,
Drowning and stoning for reasons now obscure.

From every graveyard pour the hordes to strike before dawn
A thousand years of deaths carnage gathered 'fore the morn'.
Their vengeance turned against mankind's unsuspecting head.
There's no defence, there's no escape, you cannot kill the dead. 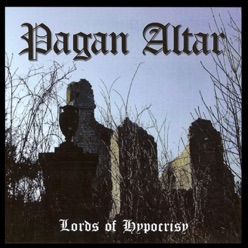