A Hill To Die Upon

“But when with vows and prayers
I had made supplication to the tribes of the dead
I took the sheep and cut their throats
Over the pit, and the dark blood ran forth
Then there gathered from
Out of erebus the spirits of those that are dead…”
[- Homer, the odyssey]

Pray for rain to wash away
The blood and grease of war.
Commit to train the children
To slaughter the children of our mothers and fathers.

The wheel spun wide,
Geometry lost its true.
The falcon has lost its gloved hand,
Sinking the heavy ship of all we knew.
The center hasn’t fallen away.
We have cast if off
Where all the blood
Was spilt to call the ghosts.

The buried us in the wounded ground;
Under grass our decay made far too green
Nekyia
We dug a trench in the rhineland,
Long as wind, payment for sin.
The black ram was brought before the lord
Of the lower third of afterworld.

Slouching towards bethlehem to be born,
The new birth beats on the walls of the womb of the
World. Crawling fourth on four, the earth is torn
By claws, and two thousand year old horns
Nekyia

We dug a trench in the rhineland,
Long as wind, payment for sin.
The black ram was brought before the lord
Of the lower third of afterworld.
But instead of its blood being shed,
Our youth was released into the pit.
The victor laid us down in our beds.

Thus it was spoke, and thus it was writ
Even the idea of a center
Is left outside to rust.
The sun is falling to dusk
On the gyre of the western world
The wheel spun wide

Nekyia de A Hill To Die Upon 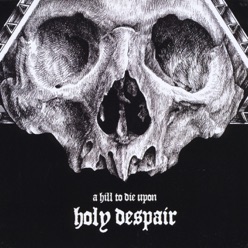 A Hill To Die Upon en Octubre