[Big Oak]
My days are filled with hassles
Little problems that run through me like a slider from White Castle
I have to, keep my mind in line and be patient
Cause all I wanna do is rock the mic to standing ovation
But that day will soon come I tell myself
For now I gotta stay content puttin papers on a shelf
But when the sun goes down, I feel free (ahh)
When stars cover the sky, I release the true me
The MC, you know the vocal technician
Mr. Black steps into the phone booth and comes out on a mission
Now I'm the Super Big Oak
Restorin integrity to what's become a big joke
See, just put a beanie on my head and a mic in my hand
A swallow of the night air that blankets the land
My right hand man Nick Fury on the right mic.. stand, damn!
It's a done deal, go 'head and seal all the exits
Lexicon will now display why we're on some next shit
No questions, just pay attention
And maybe then you'll understand, that

[Chorus: repeat 2X]
There isn't many that can say they're here to save the day
It's the two that recognize the ones that paved the way
Lexicon is out to move the crowd like the wave
Cause when night falls, these two make the people say HEY!

[Nick Fury]
The world startin to move around me again
I'm just tryin to catch up, tryin to keep up
That's why I always keep my Nike's all the way laced up
Work on dealin with the rest of the world from the waist up
I, go through the motions and smile in the face of
the cast of real life who appear to be a waste of
Nah, forget it there's a fight out back
Between Nickolaus Furious and Nickolaus Black
And the winner is? You see at nightfall I am
much less of Peter Parker and more of Spiderman
Plus I'm tighter than a spandex; and when combined with my brother
there's no doubt we'll take the advantage (yo)
Rolled down the windows and let the air blow
away the day's flow of straight and narrow
Works like a scarecrow, that's how I stand in the field
above it all, rock with universal appeal
So you better make way for the rap superheroes
Expect no less when there's an L on my chest
Got L's in the air on the East and the West
You must confess we're the illest, Big Oak said it best, yo

Lexicon.. Thes One.. People Under the Stairs
Yes, yes, yes yes y'all.. 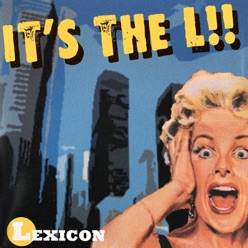