"Mystery after gala night,"
it says, "Mystery of soprano's flight!"

Mystified all the papers say
We are mystified - we suspect foul play!
Bad news on soprano scene - first Carlotta, now Christine!
Still, at least the seats get sold gossip's worth its weight in gold ...

What a way to run a business!
Spare me these unending trials!
Half your cast disappears, but the crowd still cheers!
Opera!
To hell with Gluck and Handel -
Have a scandal and you're sure to have a hit

It's publicity!
And the take is vast!
Free publicity!

But Andre, have you seen the queue?
Oh, it seems you've got one too ..."Dear Andre what a charming gala!
Christine enjoyed a great success!
We were hardly bereft when Carlotta left - otherwise
the chorus was entrancing, but the dancing was a lamentable mess!"
"Dear Firmin, just a brief reminder: my salary has not been paid.
Send it care of the ghost, by return of post Q P.T.O.:
No-one likes a debtor, so it's better if my orders are obeyed!"

Who would have the gall to send this?
Someone with a puerile brain!

Who the h*** is he?
Opera ghost!
It's really not amusing
He's abusing our position!

In addition he wants money
He's a funny sort of spectre ...
... to expect a large retainer!
Nothing plainer - he is clearly quite insane!
Where is she?

You mean Carlotta?
I mean Miss Daae - where is she?
Well, how should we know?
I want an answer -
I take it that you sent me this note?
What's all this nonsense?
Of course not!
Don't look at us!

She's not with you, then?

Of course not!
We're in the dark ...
Monsieur, don't argue -
Isn't this the letter you wrote?
And what is it, that we're meant to have wrote? Written !

"Do not fear for Miss Daae.
The Angel of Music has her under his wing.
Make no attempt to see her again."
If you didn't write it, who did?
Where is he?
Ah, welcome back!
Your precious patron - where is he?
What is it now?
I have your letter - a letter which I rather resent!
And did you send it?
Of course not!
As if he would!
You didn't send it?
Of course not!
What's going on ...?
You dare to tell me, that this is not the letter you sent ? !
And what is it that I'm meant to have sent?
"Your days at the Opera Populaire are numbered.
Christine Daae will be singing on your behalf tonight.
Be prepared for a great misfortune, should you attempt to take her place."
Far too many notes for my taste - and most of them about Christine!
All we've heard since we came is Miss Daae's name ...
Miss Daae has returned
I trust her midnight oil is well and truly burned.
Where precisely is she now?
I thought it best that she went home ...She needed rest
May I see her?
No, monsieur, she will see no-one.
Will she sing?
Will she sing?

Here, I have a note ...
Let me see it!
Please!
"Gentlemen, I have now sent you several notes of the most amiable nature,
detailing how my theatre is to be run. You have not followed my instructions.
I shall give you one last chance . . ."
Christine Daae has returned to you,
and I am anxious her career should progress.
In the new production of "Il Muto", you will therefore cast Carlotta
as the Pageboy, and put Miss Daae in the role of Countess.
The role which Miss Daae plays calls for charm and appeal.
The role of the Pageboy is silent -
which makes my casting, in a word, ideal.

I shall watch the performance from my normal seat in Box Five,
which will be kept empty for me.
Should these commands be ignored, a disaster beyond your imagination will occur.
"I remain, Gentlemen, Your obedient servant, O.G."
Christine!
Whatever next ...?
It's all a ploy to help Christine!
This is insane ...
I know who sent this:The Vicomte - her lover!
Indeed? Can you believe this?
Signora!
O traditori!This is a joke!
This changes nothing!
O mentitori!
Signora!
You are our star!
And always will be!
Signora ...
The man is mad!
We don't take orders!
Miss Daae will be playing the Pageboy - the silent role ...
Carlotta will be playing the lead!
It's useless trying to appease me!
You're only saying this to please me!
Signori, e vero?
Non, non, non voglio udire !
Lasciatemi morire!
O padre mio!
Dio!
Who scorn his word, beware to those ...

You have reviled me!

The angel sees, the angel knows ...Why did Christine fly from my arms ...?
You have rebuked me!
Signora, pardon us ...

You have replaced me!
Please, Signora, we beseech you ...

This hour shall see your darkest fears ...
I must see her ...
Abbandonata!
Deseredata!
O, sventurata!
The angel knows, the angel hears ...

Signora, sing for us!
Don't be a martyr ...What new surprises lie in store ...?
Our star ...!
Non vo' cantar!
Your public needs you!We need you, too!
Would you not rather have your precious little ingenue?
Signora, no! the world wants you! Prima donna first lady of the stage!
Your devotees are on their knees to implore you !

Can you bow out when they're shouting your name?
Think of how they all adore you!

Prima donna, enchant us once again!

Think of your muse ...And of the queues round the theatre!

Can you deny us the triumph in store?
Sing, prima donna, once more!
Christine spoke of an angel ...

Prima donna your song shall live again
You took a snub but there's a public who needs you!

She has heard the voice of the angel of music
Those who hear your voice liken you to an angel!
Think of their cry of undying support !

Is this her angel of music ...?
We get our opera She gets her limelight!
Follow where the limelight
leads you!
Is this ghost an angel or a madman ...?
Angel or madman ...?
Leading ladies are a trial!
Heaven help you, those who doubt ...
You'll sing again, and to unending ovation!


... if his threats and demands are rejected

Who'd believe a diva happy to relieve a chorus girl,
who's gone and slept with the patron?
Raoul and the soubrette, entwined in love's duet!
Although he may demur, he must have been with her!
Christine must be protected!
fortunata!
Non ancor abbandonata!
You'd never get away with all this in a play,
but if it's loudly sung and in a foreign tongue
it's just the sort of story audiences adore, in fact a perfect opera!

His game is overThis is a game you cannot hope to win!
And in Box Five a new game will begin ...For, if his curse is on this opera ...
But if his curse is on this opera ...
Prima donna the world is at your feet!
A nation waits, and how it hates to be cheated!
The stress that falls upon a famous prima donna!
Terrible diseases, coughs and colds and sneezes!
Still, the dryest throat will reach the highest note, in search of perfect opera!
... then I fear the outcome ...

Light up the stage with that age old rapport!
Sing, prima donna, once more!
So, it is to be war between us! If these demands are not met,
a disaster beyond your imagination will occur! 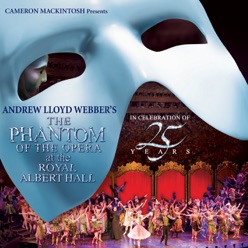 The Phantom of the Opera At the Royal Albert Hall
2011 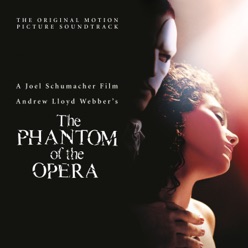