I'm on a private helicopter with my favorite ex-girlfriend
Tiny little cabin in the sky
Now we're alone and we can remember how we felt before we were angry:

We were guilty and we were bitter
(i must admit i said a few things, but...)

I'm still attracted to you
Sorry we've been so cold, so
Eight miles high and three hours to landing,
God, your hair smells really great

I'm on a hovercraft to paris with my former best friend
We have to get to the cinematheque
We're not alone but no one speaks english, so we're free
To look into each other's minds
And see what we're thinking like we always used to

I reserve the right to hold my grudges
Friends like you, you know the rest
But all told, i hold on to my anger far too long
Until it's a joke
The night is cold
The joke is old
(and poorly told, i told you once)

I'm on a private helicopter with my favorite ex-girlfriend,
No one to keep up appearances for
Now we're alone and we can remember how we felt at first;
The desperate need to be together
Must've been good for something, sugar

I'm still attracted to you
No one's making 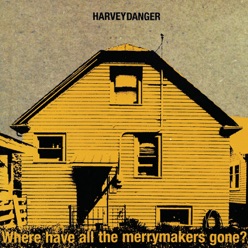 Where Have All the Merrymakers Gone?
1997
Ver todos los discos