The dew of morning still glistens on the salt grass that grows along the foundation of the old lighthouse. I isn't in active service anymore, but has been renovated to serve as a private dwelling. High in the tower inside, a young man is slumped on the floor in the corner of the room, apparently in some kind of trance. Somebody has put a blanked over him. He is deadly pale, but the steady, almost imperceptible rise and fall of his chest shows that he still clings to life. Standing next to him are young woman and an older man. Both are obviously shocked and distressed. Their frequent glances toward the door give the impression that they're waiting for someone who is yet to arrive. On the wall next to them is a blackboard covered with impenetrable mathematical equations. The older man is holding a crumpled piece of paper - it appears to be a note scribbled in haste by an unsteady hand. What follows here is the story of what happened."

[Teacher]
Will we ever understand
This complex genius
This visionary thinker

Will we never get this close again
It's been too long...
I think he's gone 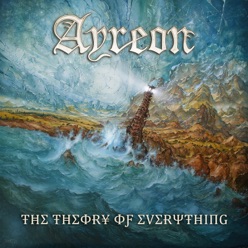 The Theory of Everything
2013
Ver todos los discos