[Erick Sermon]
Uh-huh
Yeah, yeah, "richter scale"
It goes lights, camera, action I'm on
One more time to kill em, my rap flow is fulfilling
I scream with the beastie boys, what time is it?
It's two o'clock, you gettin knocked out the box
Then kicked off the block, def squad hit squad
No we won't stop, fuck it call the cops (uh-huh)
I be the invincible, in the school of hard knocks
I'm the principle, Fatman Joe ya know

[Parrish Smith]
As you suffer the repercussions, coming through the blaze
Bust the crime scene, cause some drama, niggas ducking
When we come through, throwing the jab, in the one-two
Laying MC's out to trap, when we run through (like what? )
Like the marathon, flooded with the diamonds on
Get my rhyming on, PMD fucking shining on
Back to biz, new address with the fat crib
My shit in the wiz, poli'-in with the big wigs

[Chorus Erick Sermon: x2]
Off the meter, and every time we reach the
Tip-top and ya don't stop
In the field of rap, we pull rank no question
We top the "richter scale"

[Erick Sermon]
Bust the techniques, e.d. fantastic
Unreal gangster shit, mass appeal
Rap's top dog, I'm the one you call on
To get sic'-with-it, e don't forget it
I'm six, two and a half, heavyset, chocolate brown
Hell of a jab, gift to gab
I'm the elite, keep it underground like street level
I rock a Rolex watch, with a diamond bezel

[Parrish Smith]
Rap terror terror, EPMD, a new era
Off the Richter scale, blowing hotter than ever
With the squadron, beg your pardon, got the heads nodding
Lost your mind and said, "shit!!" when we barged in
The front door door, rugged, keeps our shit raw raw
Make hits for the fans, plus the world tour
Believe that, peep that e and p's back
Wrecking heads daily, so chill and get the bozack

[Erick Sermon]
Yo royal flush-in, all my cats be busting
Serving you customers and those fake hustlers
Whats up? step to me, I smack you silly
I'm the kid, but no comparison to billy
I ain't scared of you motherfuckers, can't you tell?
Girls lose to me when they groove to Maxwell,
I got one life to live so I'm living
Got girls to be hitting more cars to be driving

[Parrish Smith]
We stripped too many beats to make too many niggas to break
No moves are fake, no warning shots fired blasting on crews like corrupt jakes
The black viper, scream on MC's and rhyme ciphers
More dangerous mind than, Michelle Pfeiffer
So skedaddle-daddle, you get rattled don't wanna battle-battle
Put one to your rhyme saddle, stompin through, like wild cattle
We flow beef so dead that, let that shit cease
I'm quick with the hands, plus accurate with the two-piece 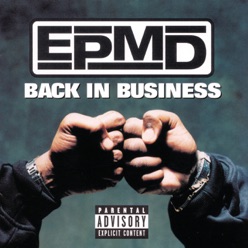