[Devin the Dude:]
I was tenth grade sophomore, she was in the twelfth
She used to call me childish, 'cause on her booty I felt
It was big, it was bouncy
It was soft, yet firm
That's why I went to school - I wasn't tryin' to learn!
I never got my turn
She never gave me a chance
I used to daydream of takin' off those Chic jean pants
At the High School Dance
She just let it all hang
Bootin' it over, makin' that ass swang
The DJ was from New Orleans, the music was hype
She got loose all night, I think the juice was spiked!
I was high as a kite, I thought the time was right
To ask her for a dance - she said, "Naw, that's alright!"
I played it off, walked back across the flo'
Fuck that, ho! Didn't wanna see her no mo'
But, about 150 pounds and 10 years later
Seen her at the grocery store, she tryin' to
holla' at a player

[Devin the Dude:]
I tried to run, I tried to duck
But I couldn't get away, she was wide as fuck!
She ask me for a hug, I buried my face 'tween in her titties
But all I could think about was how she used to bullshit me!
Back in the day, when she was cheerleadin'
They was fine with all this screamin', had my eyes was bleedin'
I was concentratin' on her, though
Them pretty eyes
That pretty ass, them pretty titties, and them pretty thighs
But now, she's a hefty heffer
Seems like everything on her body just melted together
But it wasn't no thang, gave her my number and all
And then I stepped, she said..

[Devin the Dude:]
I couldn't wait to go and tell all the niggas I went to school with
How she used to be look like "Ohhhh, damn!"
Now she looks like, "Oooh, shit!"
But before I picked up the phone, I sat back and thought
Maybe she got a problem and it wasn't her fault
So, I grabbed the number she gave me and used it
Wasn't no hard feelings, had to call her to prove it
"Whasssup? This D? Whatcha doin'?"
She said, "I'm in the kitchen!"
"Fixin' some pork chops and chicken."
Stove Top Stuffin', macaroni and ham
With some purple whole peas and yams
I'm like "Damn!"
"How many kids you got?"
She said, "None."
"Where you live girl? Shit! Here I come!"

[Devin the Dude:]
She useta be so fine to me
(I like that pork chop)
Fatter than a motherfucker!

[Girl:]
And that chicken

[Devin the Dude]
Yeah, I like the breasts, too
Oooh! Speaking of breasts, what cha got there?

[Devin:]
She useta be so fine to me
(Grab that one, nibble on that one)
Fatter than a motherfucker!

[Devin the Dude (Guy):]
She useta be so fine to me
Now she's...fatter than a motherfucker!
She's livin' large
(She used to be so fine, too!)
From elegant to elephant

[Guy:]
Still cute, she still got the same face
She still cute
She just got big ankles
Ankles wide

She Useta Be de Devin The Dude 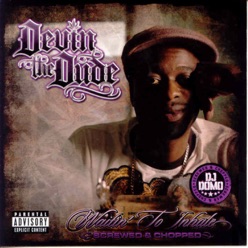 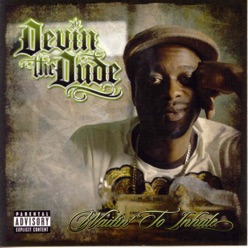 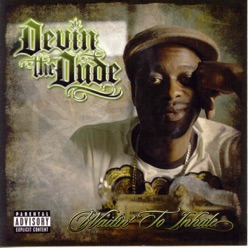