Run around downtown, cliques throw down in the mix
Clowns and infinite showdowns
Battle grounds all break downs; world's upside down
Making wicked smiles wicked frowns, we get down
With our own gangster sound
Static kingdoms break you and your manhood shallow
With shanks of venom metal
Rattle fuckin' snakes I'm as high as the stakes
Quarter ounce of weed to the head no breaks home wait
Street wars we get in them
Furious fist on my wrist is gonna get them and you

Out of frictions comes static causing mad panic
On the streets, the dramatic battles increase
We see more wars, less peace, we're even fighting police
Resulting, they're biggest enemies
Lifestyles of the criminal be wild
You wanna see more action, hold up wait a while
Fist crash giants clash
Putting on the face of the devil mask doing brain bash

Watch out, look out, look out, watch out
For the showdown, you better slow down
Give me fifty feet or better
Keep your eye on the barrel of the beretta
The lead comin' to wet'cha
Spread your body parts all over the continent
I'm a dominant mothafucka, but you're the opposite
Turn around put your hands on the side
Are you aligned by the sunshine on your gun
The outcome: you're just another one soul
Flyin' into the heavens hit by the '57
Ass end scrapping, illuminating the whole block
They all flock in anticipation
You're getting rolled by the dayton
Now I see your hand shaking
You want our of this situation

Images of war weapons the psycho presence
Blood wettens, stains the curb where you're steppin'
Deadly ground's the home of all showdowns
Come into my kingdom , sirens rattle eardrums
It ain't one on one no more, it' gun on gun
Bullets take the place of fists so what's the outcome
Crazy wars, severe scars
If you're just like me, you're defending what's yours
Taking no loss

We're heavy duty like tanks
This is my two chrome shanks
Criminal styles point blank
You think my music is crazy like tony montana
Fumando marijuana con santana tomorrow
I might not be alive, so I wanna bring all the enemy's sorrow
I rock the block with the music maniac
Tar back locos seekin' that warpath
Why don't punks be legit, they ell bring havoc in their head
A psycho one will shoot them dead
That's the fundamental to a fucked up mental
Now you got a gun, your life's a psycho realm
My strategy assault battery
Runnin' through your neighborhood in cliques of three
Smokin' in the battlegrounds on wild streets
And wild showdowns, enemy take a look around 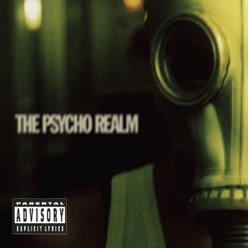