Verse 1'" Pressure
Early morn, train station, aching from the arthritis,
This war veteran knows what a hard time is,
He needs his pension, dementia and half blind is,
The reason he rides the train with no car license,
So he boards with an expired ticket has a swipe,
Gets a fine cos the change he got don't add up right,
We're talking about a man who never lived a lavish life,
Caught up in the age of computer chips and satellites,
A lovely lady boards looking tired and half awake,
He smiles, she reminds him of his wife that passed away,
She says something as she walks right past his way,
His old hearing aid don't last quite half the day,
Some young gentlemen alive with their laughter,
Approach the old timer and put a knife to his heart to,
Explain that money or bloods the price of their barter,
To a man whose friends probably died for their fathers.

Chorus
Whatever it takes can justify,
Whatever ends we make, whatever the price,
till the end of a life is just an observation,
So take a ride we're stopping all stations.

Verse 2 '" Pressure
It's been a long night the suns lifting on a cold,
Morning but she's drugged and drunk tripping on her stroll,
On the way home, she's done with stripping on a pole,
But she can't pay for her son living on the dole,
Jumps a train puts on her gloves she's wearing black,
Being watched by some old mug she's glaring back,
She's on edge and got the bug from sharing smack,
So she says, '�Hey, what the xxxx you staring at?'�
He smiles, an unsteady hand rubs on his dome,
She takes a seat, a messy band of ruffs board alone,
To the digger with a machete at his lungs and he's prone,
He can barely stand but ready to stand up for his own,
She tries to help him she doesn't choose to flee the car,
And catches a blow with enough bruise to leave a scar,
She starts fainting, the rooms moving and seeing stars,
Aint it amazing how courageous human beings are?

Chorus
Whatever it takes can justify,
Whatever ends we make, whatever the price,
Till the end of a life is just an observation,
So take a ride we're stopping all stations.

Verse 3 - Suffa
He knows nothing but hard work and scraping by,
Looking for a purse or wallet so he can make a buy,
He hasn't been on the nod since this morning,
He needs to touch the face of God, his skin it's just crawling
These peeps are sheep, time to fleece the market,
Jumps a train with some friends, sees an easy target,
An old man hard hit by age, fainthearted,
The kid pulls a knife like let's get started,
Come on,
A girl steps he's like eat the carpet,
Laughs with his friends like she's retarded,
The old man stepped and swept the assailant
Off his feet, he head connected with the railing,
You're weak the old man said as the kid lay recovering,
Blubbering, get to your feet I'll tell you another thing
A real man never lays his hands on a woman,
A real man would know that, no surprise you wouldn't,
I didn't fight in two wars just so forty years later,
You'd have the freedom to rob me on the train, this behaviour
Doesn't fit with what I gave this country so cut me,
Won't live another day in a world that's so ugly. 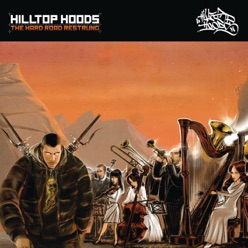