Suitor of death - whose soul is sheared to pieces.
You are wandering alone straying in haze and dismal shades.
Rival of death – whose eyes have seen silver leafs on golden
Boughs upon the great tree of dawn.

Embody the delusion and defeat of lives deluded mentally blind.
Abandon the illusion and deceit of the unearthly world behind.

Celestial athling of the nightsky dome
Tremble in fear, for i am the putrid one,
The traverser of realms, the extinguisher
Of stars, the nameless eternal.

Knoweth, i am ruler and judge,
Knoweth, i am divine and daemonic,
Knoweth and be set free,
I am the vanquisher of death.
Vanquish!

Times before dust and times beyond,
Are but mere reflections of the void.
Soul stirring embodiment divine,
Devouring the heavens and the miserable hells 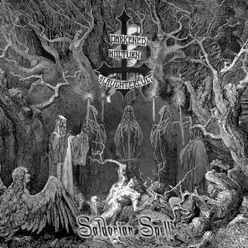