[Big Tuck:]
Fresh off the lot, the Bentley Azur
Blue and yellow's on the piece, look like they going to war
My shoe game real, it's like I'm skating the floor
The chicks adore, the house built on the shore
Big Tuck in the building, the chillest nigga in town
When it come to my paper, ain't no kidding around
DSR is the click, we holding it down
You were stunting in that Benz, till I pulled the Phantom around
Spent a grip on the necklace, won't speak on the teeth
But the top banana, bottom blueberry and peach
So many stones in the mouth, it impaired my speech
Shining so hard, I'm not allowed on the beach
26 oor 28's, the only way that I skate
Ride heavy in the game, I got the Cheve in shape
The man with the cheddar, dividing the cake
Take a plane to Aruba, and go surf in the lake

[Big Tuck:]
A lot of y'all don't know me, but a lot of you do
Bought a plane from Diddy, and sprayed it cancun blue
The car you driving, I bought six for the crew
Check the seven point one, I got the signature too
I feel it ain't right, to be rich like this
Got a pond in the kitchen, with the tropical fish
VVS on the chest, leave a marvelous gliss
The '76 Chavelle, with the Lambo kit
Bought some land in Miami, without touching the stash
The glare from the watch, will cause a pilot to crash
The paint job sick, I got it wet as a bath
Get a whiff of this starter dro, puff it and pass
Got my locs on pimping, if it's sunny and not
Turning corners in a Phantom, Hugh Hef' ain't got
The Big T you see paid, I'm way too hot
If you ain't talking bout money, what you talking about

[Big Tuck:]
I got my locs on, and I'm shined up
G4 plane, better go on get your grind up
Fall to club, Lamborginis all lined up
In a world of our own, lil' mama don't mind us
It's me the hook, the cross the jab
Big Tuck's the chemist, and the booth's the lab
Pimping the mic, it's the gift of gab
I'm the man of the hour, I got loot to grab

That What's Up de Big Tuck 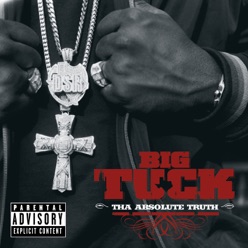