Trina](Rero)
Ay rero
(What's happening?)
Look out da window
See that fucked nigga riding down the street in that Jag?
(Yeah, yeah what about him?)
That's da lick right there
(So what you sayin)
I can get his bread, take all his dough
(Then bitch go head what you waiting for)
The right time I'mma get it all I'm telling ya
This ain't no bullshit I'm selling ya
Straight off the boat, good dope I'm telling ya
Nigga no joke if you revoke, I'm bailin' ya
If shit get to hot I'm Makavalin ya
Is you down for da plot
(Now you know i ain't failin' ya)
(But any tricks bitch, with the flame I'm sweatin' ya)
(Cause you're a slick bitch, I can see the hell in ya)
(I'm tellin' ya no games)
Nah nigga straight up we can split da weight up 50-50
(60-40, deal?)
Yeah
(You sure)
Damn real that's still 6 digits
(So what da nigga name)
Stingy, he pack plenty
(He got any friends)
Not to many he hang with one man
(He got a name?)
Lock toting gun man, you heard of him?
(Nah but I know just the nigga to murder him)
(The ex con I know named Bong, psycho Vietname vet who owe e a bet)
(When you wanna set it up?)
Now nigga, I know where he at right now nigga
(Well shit hand me the phone)
[Rero](Bong)
Bong!
(What up nigga?)
It's on
(Where it's at? I've been waiting for this type of lick)
[Trina]
Enough of that shit
Let's do something quick
Rapper go and shoot something
It's time to get paid
(Well bitch call him and see where he at)
Nigga I told you I knew where the nigga was at right now
Nigga you think I'm playin give me the phone
Hold up, hold up be quiet, shh
(Hello)
What's up boo?
(What's happening?)
Nothing i was just thinkin' bout you
I wanted to know if i could come see you tonight
(What you think, you ain't even have to ask me no shit like hat)
He, he, he
(Hold on baby let me see who this is on the other line
Member of Lost Tribe](Pull)
(What up nigga let's go get that fill)
Hey what up Pull
(Cowboy)
Hold on Pull I got this bitch on the other line
[Trina]
Damn nigga what the fuck you had me on hold for so long?
Who the fuck you think I am En Vogue?
Nigga so what you gon let me come through or what?
(Damn it ain't gotta be all of that, simma down a little it)
(Come through about 8 shit!)
Alright I'll see you when i get there
[Pull](Member of Lost Tribe)
(What'cha say yo?)
I got a bad ass bitch on the way yo
(Who dat?)
A bitch named Trina
I met her at the mall, ya should've seen her
(Hold up, red hoe push a Beemer)
Oh nigga you know the hoe
(Yeah that hoe'll set you up boy, she all for it)
I could never fall for it
(Nah never say never yo, she a little cover hoe)
(Set niggaz up for they chedda yo)
But I'm alot better though
(Boy I'm tellin' ya she'll wet niggaz up)
With what the pussy, nigga I ain't stupid over no harmless hoe
(You ain't listening yo, she bustin more than nuts)
(Besides you barely know that slut)
(What don't think she know about the blow and the blow
(And the g's and the g's and the shit from overseas)
Well if it come down to that, then I'm a squeeze
And since you feel like that
I'll keep the pistol with the bitch on her knees
(I'm still coming over there)
Whatever yo she with that freak shit
(I ain't on that creep shit, I'm coming to peep shit)
Oh nigga where you at?
(I'm down the street shit)
Hold on pull
I think that's the bitch at the door there, who dat?
(It's me nigga)
Hold on, damn what the fuck took you so long?
What you was out a town or something?
It's all good though
As long as you brought that phat ass with ya
Close the door, close the door
Hold up!
[Trina]
Fuck nigga you ain't heard?
I'm da baddest bitch 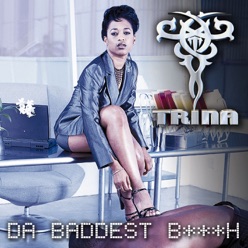 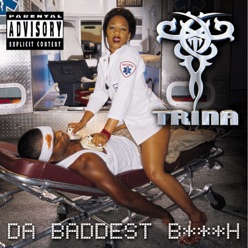