"Beware the Raven that stands alone, the one that watches and waits,
Beware that unguarded moment, that subtle twist of fate.
It may just be the eyes of the Crow man".

You see a group of dancers in the street
Dressed up to look like chimney sweeps.
But under the feathered hats and ragged clothes
There hides the Crow man.

Faces blackened out so you cant see
The colour of the soul that lies beneath.
Behind the painted masks that hides their faces.
There hides the Crow man.

People gather round to cheer them on
And laughing joins in the dancing throng.
Unaware of the dark side behind it
They don't know what's really going on.
It's part of a ritual from the past
The dance of the Crow Man

Down through the ages down through the years
At springtime the crow man will always appear.
To feed the earth with the blood of the chosen
To ensure life's circle for the following season!
To replenish the earth by the taking of life
In the Crow mans ritual blood sacrifice!

In the crowd he'll see a person all alone
And point with an ancient Runic stone.
The spell is cast and only death awaits them
No one to miss them when they're gone
With no family to mourn or to care
They're now part of the Crow man. 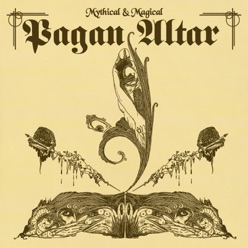