Welcome to the riot, it's saturday night
I'm workin' on red eyes but I'm feeling alright
Ain't it like a living end, and burning like a flame
I take it to the limit before the glory fades
You say our music's brainless-boring punk rock
A psychedelic nightmare, but when they gonna stop
Andrew's on Daniel's, Toody's on Bliss
It's all I ever wanted, the best it ever gets
My head's a little scattered 'cause I'm working on the dead line

There's a panic going backstage, something just broke
Edwin's got a flashlight, looking through the smoke
Monitors squeeling and I just broke a string
And Andrew's got beer sprayed all over everything
Someone tripped the power, the lights are going dim
People hanging outside trying to get in
Toody's yelling something, I must be out of tune
That's the least of my problems, can't hear nothing in this room
My head's a little scattered 'cause I'm working on the dead line

Yeah, my life's a broken wire but I'm getting my kicks
Another night of chaos with Edwin on the mix
Time to load equipment, where the hell did Andrew go ?
Weeden's got the t-shirts, and records on the floor
Hans and Ruud are talking, man, I need a cigarette
They say we're playing Vera, if we don't get in a wreck
Toody holds the lighter, when someone has to ask
"So why's the candle burning ?" "Cause nothing ever lasts"
My head's a little scattered 'cause I'm working on the dead line 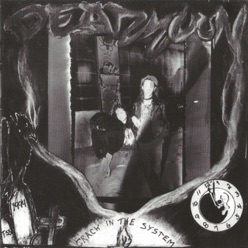