The Gates Of Hell

Shadows of the past fade before my eyes, there are evil voices in the air
I sense a presence in the darkness around, pervading every sound and every shadow
The moon is full; the horned messenger that has guarded this world for aeons
Yet now only beckons to those who still bear strength in their hearts
The strength to fight, conquer and kill the ones that have raped this earth
For so many years

I am drawn towards the woods again, where trees whisper of a storm to be awoken
Of powers that were asleep for many years and a glorious past that was forgotten
It is true that many of us had grown ignorant and weak
Whilst the world around was slowly declining
Fools! Unaware of the infernal wrath that waits to be unleashed upon them
They fell to the liars' words and bowed before the cross of the dead one

With my every thought the dark enhances thousandfold
When suddenly I emerge from the shadows into a clearing
A gruesome silence in the light of the moon, the ground breaths pure evil
I know I have reached my destiny in this world

Four others I distinguish, grim and pale faces with empty eyes
Now the pentagram is whole, words are spoken and steal gleams in the dark
The roar of a thousand storms approaches
The earth trembles and the moon turns bloodred
As we cut our flesh in honour of our forgotten Lord's return
Demons start emerging from the abyss, the legions of hell are set free at last
As a vast black shadow leaves the gates now opened wide
Our mortal bodies lie scattered and dead
But we shall be reborn in His fire and our deaths will not have been in vain
For our sacrifice will wrap this world in endless darkness
And tomorrow shall know the blackest dawn
For we have opened the gates of hell, this will be the final holocaust of the human race 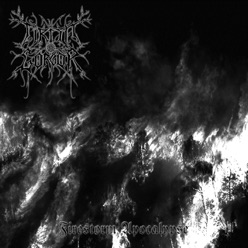