Although our travelers had seen a lot of horrible things during their
journey, nothing would
prepare them for what they were about to see when they entered the
village... Women and children
were slaughtered like cattle. On giant poles, warriors and old men were
impaled, and all around the
village there was a very thick and dark fog. Never before had they seen such
cruelty, and no one,
not even the brave dwarf could keep the tears from falling. There was no
doubt that the army of
darkness had paid a visit to this village. And by the damage made to the
village they were quite
sure that the dark side had found the book of mystery. That was the only
thing capable of doing
this kind of damage.

Suddenly! Someone cried out in agony! The travelers froze for a few
seconds... were the dark
army still around the area? The air was quiet... but there! Behind that old
ruin! Someone was
moving. They all ran towards the ruin, and what they saw came as a shock to
them.

There was a survivor. A woman, bruised and beaten, but still alive. As they
began to speak to
her it turned out that she was one of a warrior clan with a mission of
guarding the book of
mystery. Obviously they had failed. Someone inside the clan had betrayed
them, and sold the
information to the evil one, and therefore the book of mystery was now in
the hands of the dark
side.

She had sworn an oath to guard the book, and to the gods she now swore to
bring it back to the
sorcerers of light, no matter what. So when they left the village they had
one more traveler by
their side, and her name was Kira the Guardian.

Soldiers were coming far from the hills
To seek the magic we concealed
My people were slaughtered, taken as slaves
To work until their dying days

So now that it's taken, it won't be long
Before their powers will be strong
Using the magic that's in the book
Their reign shall grow, the dark will rise

But I know that one day
I will see victory...

And as we leave the place that was my home
That now is laid in ruins
I swore an oath to restore the book of light again
And take it were it is safe
From all greed, from the dark, and misery

So follow my footsteps, and have no fear
I'll be your guide through the shadows
Always be ready, always be sharp
If we shall survive in the dark

But I know that one day
I will see victory...

The Secret's Revealed de The Storyteller 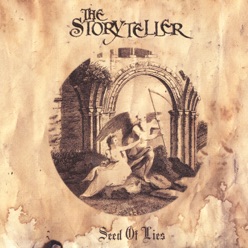