Attention, we gotta thang for cotton-candy rappers
That gotta be in the bed before 9:00
Cover ya ears, pop ya ? baby

[Verse 1: Chamillionaire]
Yeah, I end the heat like a pizza man
you want beef I'll unpack it for ya
Dike Jones, is a wack rapper but he isn't a bad promoter
You don't know want problems my nigga
my stats is way past a quarter
Cuz I'm gettin' what Flipper says in the initial that's after Clover, G's
Nigga please, them commercials ain't even right (why)
Texas niggaz be pourin' purple, we been don' remixed that Sprite
Okay Koopa stick to this Dike, you right if he wanna fight
But this ain't no Lil' Flip beverage he won't have a Lucky Night (nah)
He lucky if he have a life, sayin' Cham' ain't gon' get a deal
Ain't no rhymer you's a vagina, it's time for some Vagisil
Want problems then Crank It Up, ain't no Static or Banner here (nigga)
I crush that lil' man career, like a Budweiser can of beer
Bout to dig up a deep hole, so ya album can rest and sleep
You can put all ya lyrics in it the gimmicks can rest in peace (Who?)
I bought ya CD, you was sayin' how you the best in the streets (Uh-Uh)
So I had to go get my quarterback like niggaz who step in them cleets
Hut 1, Hut 2, now you in some trouble fool
And my brother don't like you now, you got trouble in doubles dude
And you won't get to guzzle juice, no opening for ya food
Cuz the only way to shut you up, is a muzzle to muzzle you
Watch the punisher punish WHO?, nah, I don't have to ask ya
You said it, now you gon' get it, and I ain't gon' have a hassle
You ain't the King, I should know I'm the nigga that built the castle
I pull my back-hand and slap you, turn you 'to a dizzy rascal (WHO!)
That ain't hip-hop, I swear that garbage gon' get stopped
I'ma kill the tick-tock you got in your flea-market wrist-watch (Fuck that
nigga)
He said I fell off, and Koopa could never get hot
Can't pull my dick out, cuz he got my dick in a lip-lock
Man, I'm just sayin' though get off my genetalia
Get off my nuts, I'm bettin' ya, no you ain't no competitor
Mo' money and mo' money record sales, etcetera etcetera
So I'ma delete you, and put Magno back there instead of ya (OH!)

Who They Want de Chamillionaire 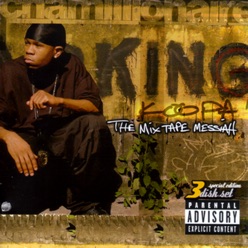