It's the smell of hot summertime trash,
it's the city noise of a busy street
it's a train derailed and tow car head on freeway crash
each time we meet
"and if it comes as some sort of surprise," she said
"that I seem so composed,
I've keptm this moment closer to my eyes," she said
"than the glasses resting on the edge of my nose."

shadow am I!
a question of a person, no said replay
wolf am I!
and shadow cast on the sheep as I pass by
shadow am I, or like a
wearling-black-socks-and-white-woolen-locks
wolf am I, and shadow.

she was graceful and green as a stem,
but I walk heavy on delicate ground

(((... as I go showing off again,
self impressed by how well I can put myself down!!
and then go again, tot he next further removed level
of that same exact feigned humility!!!)))

shadow am I!
like a suspicion that's never confirmed
but it's never denied
Wolf am I!

(((no, "shadow" I think is better,
as I"m not so much something as the absence of something)))

So SHADOW AM I!
the material world seems to me like a newspaper headline -
it explicitly demands your attention
and it may even contain some truth,
but what's really going on here?

one day the water's gonna wash it away
and on that day, nothing clever to say.

Wolf Am I! (And Shadow) de mewithoutYou 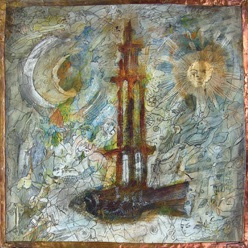