World Has To Die

Forest of the impaledreflects in daemons' glare
Black slashing rainit will not wash the blame
The fallen angels horde is lead by the evil sword
Voice of the dead, dispair of half-living men

The slaughter fulfills his longing for the blood
This is the ultimate fallen angels fly - WORLD HAS TO DIE!

Melting flesh in the fire of hell is the rest of human race
Legion rules in heaven , your hope lays down in burning graves
Sacrifice was made, the ultimate war destroyed the world
Savage horde - the army of the evil crusade delights the lord

World Has To Die de Hate 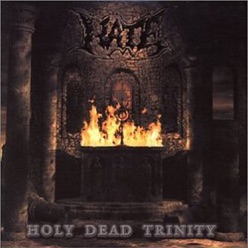