An Enemy Led the Tempest

As pride precedes a downfall, so he took his place before the firewall
Of dissonant choirs whose faith in one
Was embraced in this wraith whose fate was hung
Between forgiveness and the damage done
An electric scent over drear decay lent a violent surge to their serenades
Through white glades as his winged parade
Bent to silhouette and to sharpen dull razors
Within vast skies unversed in starknees his might grew
And blew light hues to grey...and worse, a third of stars to darkness
Then thunder seethed and wreathed in thickening night
A line was drawn midst wrong and right and across the throuts of thieves
As love fell choked, the tempest broke from Heaven's farthest shore
Descending to eclipse all hope, repentance might stay holy war
He would not heel nor fake a bow, Murmur curses to the wind
Enraged, he raved in a Balrog howls upon a storm firstborn of sin
Incensed anew, rebellions tore like frenzied beasts of prey
Through temple doors...through east before the midnight masses
And where once bliss reigned so serene in sweeter glades
Now viens ran openly...like eyes that shied from kindered ashes
When suddenly there shone a hideous light
And a voice like three inanities soared up in thistled speech
Thou hast bred hate where there dwelt none and for this grave mistake
How thou art falling morning sun.....the proud will be abased
He would not heel nor fake a bow, Murmur curses to the wind
And lo - the wrathof God swept down...
Thou art no more an Angel filled with light, but a leech to be abhorred
And thou shalt suffer my burning will, Quoth this raven...nevermore
Neverfuckingmore...
And with these words like heavy stone cast against that gilded throne
With many legions still in tow, he turned his wings to flee
His eyes a picture of distaste, dawn to tears and in their place
The dawn of time and fates to face, through all eternity...
I wept for him a deep red river that ran like blood through scarred ravines
To sluice away the guilt that slithered like a Serpent tongue to Eve
For once as I in Heaven climbed too high for truth to truly see
My sunken mind, drunken and blind, saw the lie - that fool was me...
Alone and cold, face to the crack, beyond dark gates with no way back
His crown of gold faded to black like a bruise upon the heart that lingers
With thrill-kill culture shock wave lengths of rope to hang high
Ten commandments by...snaked about his upraised fingers...

An Enemy Led the Tempest de Cradle Of Filth 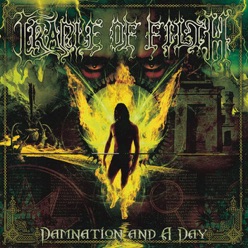