The Girl Friend Of The Whirling Dervish

One fine day, I chanced to stray
On a little side street in old Bombay
And met a sentimental oriental
She saw me and I saw she
Had a manner too bold and much too free
Her eyes were positively detrimental
When I asked about this gay coquette
I discovered much to my regret....
She's the girl friend of the whirling dervish
She's the sweetest one he's found
But ev'ry night, in the mellow moonlight
When he's out dervishing with all his might
She gives him the run-around
All the boy friends of the whirling dervish
Are his best friends to his face
But there's no doubt, when he isn't about
They all come hurrying to take her out
She leads him a dizzy pace
He dreams of a Hindu honeymoon
He doesn't dream that ev'ry night when he goes out
To make an honest rupee
She steps out to make a lotta whoopee
Oh, the love song of the whirling dervish
Has a sweet and tender sound
But will he burn if he ever should learn
That while he's doing her a real good turn
She gives him the runaround
She's got a nervish, throwin' him a curvish
Which, of course, he doesn't deservish
Poor old whirling dervish!

The Girl Friend Of The Whirling Dervish de Connie Stevens 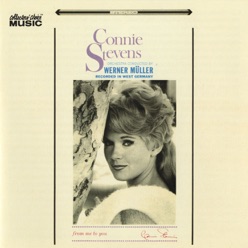 From Me to You
2005
Ver todos los discos