Eazy:
What you want is an unexpected approach,
that may delay a suspects awareness of your presence,
until you have a chance to assist the situation you are confronted.

Approach to danger, don't move;
it's hard to predict what will happen next.
(Oh shit, he has a gun!) drop the gun
you could've prevented a tragedy.

Ren:
You can approach, but the danger-light is blinking,
a self-desctruct button is activated when I'm thinking.
This is a tribulation, the weakened judge,
the prophecy was fulfilled cause I never budge.
I took up the tools, crucifixion was the extreme,
they're seeing doubles of me, but it wasn't a dream.
One vision was of life, the other was death,
Then I didn't give a fuck if death took your last breath.
So you burn in my pit that I call hell,
where you got send because your shit don't sell.
My twenty-twenty was blurry from the smoke,
of the niggaz that I burned and tormented but I didn't choke.
I started doing 'em, I kept on doing 'em,
do 'em for shoot 'em up till that nigga Ren was booing 'em.
And my presence to the suckers was of a stranger,
but fuck it, they can approach to the danger.

Dre:
Fatal approach to danger, just to remain a strangeler,
outrun, the shot of a gun with a ganger.
Murder in the first degree, but it's worse to be,
a dead motherfucker or a nigga in custody.
With everybody thinking of death I kept working,
to be one of the last niggaz left.
So many people looking for hope, they're broke,
without checking the fingerprints on the motherfuckers' throat.
A heart of steal can reveil the real nigga in me,
so figuring to see the D-E-A-D
bodies like a nigga's straight walking in a cemetary,
so it's very necesarry to carry ammunition for niggaz wishing,
but they better take caution, before Dre goes off,
and starts killing motherfuckers,
just in order to change the anger for the real nigga,
when I approach to danger

Approach the motherfucking danger,
Come back to hell and send me some time... (this is it y'all)

Eazy:
Final approach to danger, death, destruction around every corner,
another dead body and you wanna keep running.
But even the rain turns black,
all you can do is stay alert to try to say out of the search-light.
No prison, nobody makes bail,
everybody gotta go but see, it ain't no jail.
Think about death, taking your last breath,
heart beating like a motherfucker like there ain't no time left.
For so many ways to stay up, I gotta get mine,
even though they wanna make a crime.
Yo, I'm being real, a better or latter in the beginning,
because it will release the fucking police.
Fuck 'em, I approach to danger,
cause I don't give a fuck if somebody gotta get fucked up.
So you might as well kiss your ass goodbye,
cause in the long run... (we'll all die) 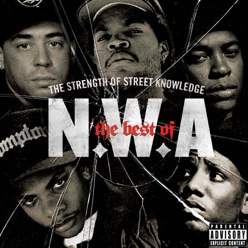 The Best of N.W.A: The Strength of Street Knowledge
2006 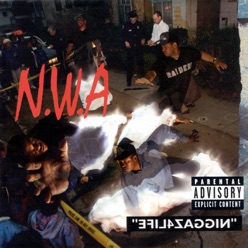