[Eon]
One day I launched a rocket up into the moon
And landed on a crater in a blue lagoon
Three girls in the nude, in the pool they had room
Screamin, "Starbuck we want to have a orgy with you!"
But never in my life had I seen green bitches
And when I want they would grant me three wishes
One was a pound of the blue moon hydro
Twistin it up, watch my divine mind blow
Two was a pair, of gravity boots
With a space helmet, and a Nike moon suit
They took me from the pool up to the bedroom
Where wish number three, my dick they consumed
They hittin me off orally so lovely
Now those dainty ladies they took it easily
Time flew by, no weed, time to leave
It's time to get back to Earth at breakneck speed
I told the moon bitches that I'd see 'em again
And thank you very much for the weed and the head
They were three moon girls, I fucked every one
That story is over - "but my rhyme ain't done!"

[Cage]
This is how I get where the fuck I get
I went to Harlem so I could get some wet
I bought the dutch out of the bodega
Left a cloud of black smoke in the air
Took a '99 Beetle - on a magical mystery tour
Your, narrator's pedal hits the floor
Saw a hardcore, punk rave bitch yellin, "Fuck the law!"
Guzzlin alcohol, leather jacket and a bra
Boots militant, her nose caked up with (?)
Kicked her in the face, yellin Kent
Dipped cigarette, Masai Bai is on cassette
I'm chewin on her nipples like nicorette
Crashed into a Corvette, doin eighty
Face hit the back she went through the glass of the Mercedes
(Oh shit!) Crushed all her bones - and I heard every one
That crime is over - "but my rhyme ain't done!"

[Eon]
Captain Crunch was a slanger of narcotic cereals
And Toucan Sam was his right hand "MAN"
Now Sam was a skimmer, a mini-wheat slinger
Killed Count Chocula with the snap of his finger
Tony the Tiger was his arch-enemy
So anthrax Apple Jacks disguised as Sugar Smacks
To add to that, he was flippin Fruity Pebbles
Told the hoe to hit the skids, cause Trix was for kids
Snap Crackle Pop sellin Krispies on your block
Lucky the Leprechaun is suckin up top
My man Sugar Bear was the one they feared most
Cause he was always known to pack that Cinnamon Toast
Boo Berry got caught, at the Honeycomb Hideout
The man with the Wheaties was a former wide out
There were ninety-nine cereals, I ate every one
That story is over - "but my rhyme ain't done!"

[Cage]
I met this kid named Bob Skarm(?), he had a farm
His pops got shot by his little brother in the front lawn
So he inherits the land, comes up with a master plan
Put Cuba out of B.I., he hands me a C.I.
I got a half a acre, need help with the cultivatin
Thirty-percent of the gross, hands me toast, let's roast
I got a four-wheeler, no street dealers will mega Cage
Won't even leave the state and drop Indelible "Weight"
(What?) Pushed the plow, from here to Moscow, where do I start now?
Burn the crops if you see cops call blaow blaow
I got it, whippin the tractor blotted
Before the first harvest in the corn rows Cage spotted
the tail ends, under surveillance, merc the crop
Run up, (?) got knocked for the smoke lookin at twenty summers
Six hundred plants, and they burnt every one
That story is over - "but my rhyme ain't done!"

[Eon] Now I'ma tell you what the fuck this means
[Cage] From nine one four L.E.S. and Queens
[Eon] Two lyrical technicians that came to play
Number one Smut Peddler ("Eon and Cage!")
Just a little somethin that we made up
[Cage] Sick lies on time, Mighty Mi on the cut
[Eon] Some of it is fiction, and some of it fact
[Cage] Now they love a dumb rap on a heavy drum track
[Eon] They were mad fuckin hoes and we fucked every one
That story is over.. "and my rhyme is done!" 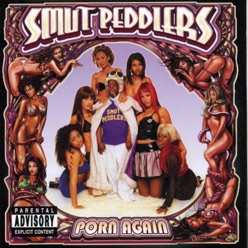