[Intro: Hell Razah]
Yea, Freedom of Speech, Article One, Rebel Music
Feather pen, sword written in blood here
uh-huh, 4th Disciple, Razah, paint the White House black
Freedom of Speech, we say what we want, do what we say
Live what we say, take the oath, tell the truth

[Verse 1: Hell Razah]
Ayo the Bush's got plans - to lock down Afghanistan
Take all of the Heroin, bring it out to Desert land
The black man, write his war, why we was neva fam?
I be a Sun of Man, blood kin of Abraham
Holy wars in Iran, now we're be eye-scanned
Divided we stand, united we fall
Like Babylon, they built the Twin Towers too tall
In these days of Revelation, ain't nobody could ball
Hand writings on the Project walls written in Hebrew
With hand made Desert Eagle, I kill evil
Four hundred years later, we still feeble
My inmates that's locked in hell, we still need you
I be the breath of life for dead people
Valley and drop o's, I dare who try to sit it in my throne
He's ass hole, for thinkin' he could fuck wit our zone
He better spit that weak shit about them diamonds and hoes

[Hook: Hell Razah]
Ayo it's "Article One"
Break you down like the parts of a gun
Razah and 4th, "Article One"

[Verse 2: Hell Razah]
Respect the pen again, we've been in the flame
Hot tracks With a mean Shaq / Shaft, after Penny go flow
Son of Daniel, we'll read the manual to a pro
Over my head be Halo, my tray eight'o
Come in colors like Play-Doh, and kid Lego's
Most losers turn Judas when they see peso's
Well alrighty then, we ride like David and his mighty men
Drivin' in a shiny Benz without tiny rims
Oh you a killer?, he's a dealer, so what, we still iller
Now it's time to meet your parents for real, like Ben Stiller
Chain glitter, like a chandelier, fam got hammers in here
So ya better show some manners this year
Ayo, my first name is Hell, last name Razah
We ain't try'nna deal with no snakes and no traitors
First name 4th, last name Disciple
We them maniacs, comin' back for the title

[Hook: Hell Razah]
Ayo it's "Article One"
Break you down like the parts of a gun
Razah and 4th, "Article One" 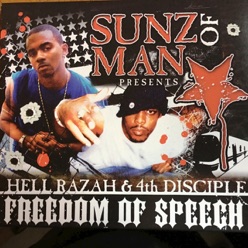