He got in his car and told himself to drive
gotta leave it all behind if he wants to feel alive
19 and lost and never thought he'd ever leave this place
vacant mind from endless grind so what's to lose anyways
Another fast food job?
Another 8 to 5 day?
Ten minutes and two miles is just a mile too many today
and you can see why it's easy to say
y'know that hell looks a lot like L.A.
six months ago was the last she felt alive
moved down from the north and told herself she'd try
18 and lost and never thought this place would change
ignored and bored the same feelings as yesterday
she said it's way too much more than she could take
it's one less car that's in the way
y'know that hell looks a lot like L.A.

Hell Looks A Lot Like L.A. de Less Than Jake 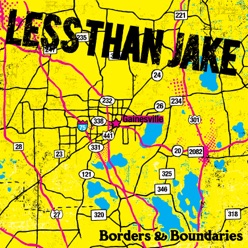